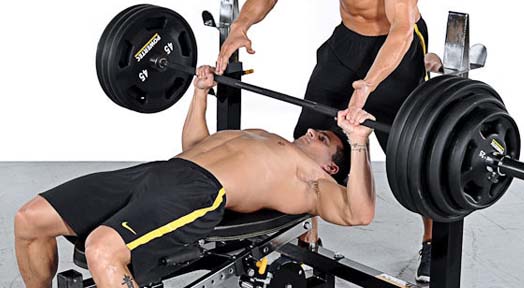 The Bench Press is undoubtedly one of the most popular exercises in strength training and bodybuilding industry used today to enhance muscle growth and develop core strength. Sadly many beginners and even advanced training individuals have been found doing their training a great disservice by failing to recognize the proper technique for maximizing their strength and available power during each rep. Learning how to bench press like a professional begins without the use of any weights on the bar. This allows the individual to determine the correct spacing of the hands on the bar.

This is generally achieved by the person laying on the bench removing the bar from the rack as though they would normally do. The bar is then lowered towards the chest as the spotter carefully observes the alignment of the forearms. To achieve the optimum power the forearms should be positioned as close to vertical at the lowest point of the lift as possible.The grip should be adjusted appropriately noting the position of the hands relative to the smooth rings located on the Olympic bar. This exercise has been used to demonstrate effect of positioning the hands wider which results in the power used in pushing to be displaced in an outward direction, thus if the hands are places closer and the forearms positioned vertical, then the power exerted is displaced in an upward direction.

Choose the best technique for you

Locking down is a specific technique used by many professional bodybuilders and trainers to lock the shoulders into a position to achieve the maximum stability strength possible. The individual begins by laying on the bench planting both feet firmly against the floor. The knees should be positioned roughly at about 80 degrees. Placing the feet on the bench results in a loss in stability and power and should be avoided at all costs. The hands are then placed on the bar in the previous position discussed.

The most important thing about improving your bench press is that you increase your weight along with maintaining proper form. The goal is to execute each higher weight at the same proficiency as the one before.