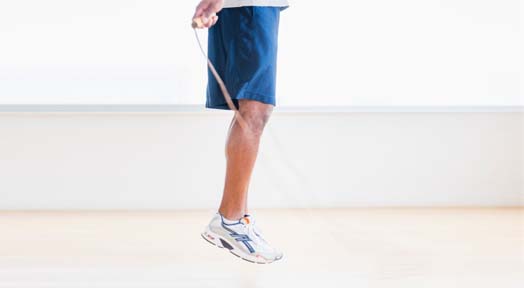 Cardiovascular training contrary to the traditional belief does not focus entirely on running aimlessly like a hamster on a wheel or performing numerous reps of a stair master exercised for hours while reading your favorite copy of your men fitness magazine.

Top Cardio Workouts you can do at Home

Rather the art of Cardiovascular commonly referred to as cardio training involves any training exercise with the known ability to benefit the training individual with an enhanced cardiovascular system within the body through elevation of the current heart rate resulting in vast improvements in muscle oxidation and utilization.

Many fitness enthusiasts today have seen the numerous benefits of cardio workouts within the confinements of their own home by actively performing some of the more popularly used cardiovascular training exercises by many of the known professional athletes and bodybuilders in the fitness industry today.

The Kettlebell swing with it's explosive power has traditionally been used to stimulate muscular growth through oxidization while increasing cardiovascular endurance in the individual training by combining the benefits of the tradition dumbbell training with a high intensity cardiovascular workout.

This exercise has been proven in it's effectiveness in increasing the metabolic rate of the person training inevitably enhancing calorie burn resulting in loss of fatty tissue and weight loss. Performing the kettlebell swing cardio exercise with a light to moderate weight has been observed to increase the energy produced during training by forcing the individual to rely on the assistance of the muscle tissues for performing the exercise thus enhancing the development of muscular mass, and core strength while strengthening the heart muscle and toning the overall physique of the individual.

The kettlebell swing is easily performed by the individual standing with both feet at shoulder-width apart holding the kettlebell in a forward position at eye level using both hands. While bending the hips back the kettlebell is swung backwards between the legs for one count and then forcefully forward bringing it back to eye level completing a single rep of the exercise.

The simple and highly effective jump rope workout remains today one of the best exercises imaginable for enhancing calorie burn and fat loss in a large number of men today. The average male will burn more calories during 15 minutes of a jump rope workout than running a distance of eight miles.

This workout has not only been able to vastly improve the metabolism rate and fat loss of the person training but has also been credited in it's ability as a form of cardio training to improve the flexibility, agility, balance and upper body muscle tone of the average man. Many fitness experts today still consider the jump rope workout the most effective and affordable equipment assisted training workout used today offering the best option in cardiovascular workout.

Many men today have used explosive bodyweight exercises as an effective method of cardiovascular training within their workout to increase their heart rate to stimulate loss in tissue fat and improved body physique and muscle tone.

Most explosive bodyweight exercises are often performed using a form of high intensity interval training accelerating the movements of the body during the exercise to achieve similar results to training recognizing the use of weights. Some of the traditional used exercises in an explosive body weight training workout include, the burpee, the jump lunge, or the jump squat.