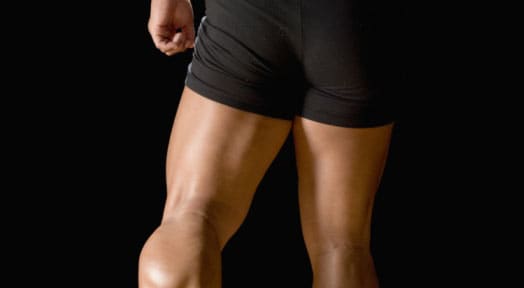 Athletes such as professional cyclists, skiers and swimmers have the natural benefit of performing exercises due to the nature of their sporting activity which effectively targets the muscle groups located within the rear of the thighs, the hamstrings and the glutes in order to increase their endurance, speed and overall performance when competing. In addition to this increase in performance through their specific training they have the added benefit of exceptionally toned hamstrings which results in their well shaped legs. Here are some exercises below to strengthen glutes.

This exercise is performed as the person lays on their back placing an exercise ball beneath the calves. Both hands are positioned on the floor to maintain a level of balance and stability as the butt is lifted off the surface.

While maintaining the ball in a steady rotation the right leg is then elevated keeping the left leg firmly against the ball. The leg is then slowly lowered towards the ball as close as possible ensuring the leg does not touch the ball and then gradually lifted in the air again keeping both legs straight. This motion is repeated between 10 to 15 times which strengthen glutes.

The leg is then lowered securely placing it on the ball and the left leg used to perform the lifting exercises.

The Deadlift to strengthen glutes

The deadlift exercise begins with the user firmly holding the barbells or both dumbbells at their side ensuring both arms are positioned straight with the knees slightly bent.

Slowly bending at the joint of the hips the weights are lowered as much as possible keeping the back perfectly straight and aligned with the neck. This is typically achieved by keeping the spine neutrally positioned with a lower back arch and both shoulders down ensuring the eyes are positioned looking in a forward direction.

The weights are then brought closely towards the legs as possible without touching them. By contracting the gluteus the body is elevated as an increased pace than used to initiate the exercise to strengthen glutes. Weights used during this exercise should be selected to allow the user to complete three sets of the exercise each consisting of at least 15 reps.

The Elbow Plank With the Donkey Kick

This exercise begins with what is referred to as the elbow plank achieved by placing both elbows directly below the shoulders and the abdominals positioned towards the spine ensuring the pelvis free from any notable lift or sag. By lifting the left leg slowly off the ground, the knee is bent at 90 degrees thus positioning the sole of the foot pointing directly towards the ceiling. While performing the lift it is vital that the pelvis is not allowed to twist.

The left heel is pressed in the direction towards the ceiling as high as possible without moving the lower back of the pelvis concentrating on the hamstring and buttocks.

The leg is then gradually lowered slightly repeating the motions to achieve a total of between 10 to 15 repetitions before switching to the right leg.

Strength training was once seen to be used mainly by athletes and body builders has now been widely adopted into many of the mainstream fitness workouts. Many of these strength training routine have even been recommended for individuals within the age 40 and over groups performing specific workout aimed at targeting their gluteus and hamstrings firming up the thighs and tightening the buttocks.