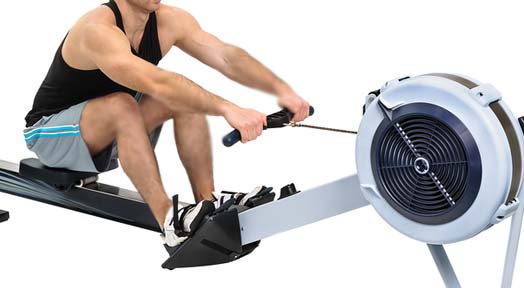 The ergometer commonly referred to as the rowing machine is widely known for providing the body with a full body rowing workout exercise. But don't be fooled by its' common appearance or boring name. One session on this machine will have you sweating, burning and crying for your momma.

When executed with the proper technique the motion of rowing is proven for targeting and engaging a range of muscle groups including the core, legs, back in addition to the arms and shoulders as well as benefiting the person training with an excellent form of resistance and cardio training within one exercise. As a low intensity exercise the full body rowing workout is ideal for men who are generally considered overweight as well as for individuals susceptible to back and impact-induced joint problems.

Full-body exercises such as the rowing workout are known for simulating our every-day movements at home, work or even during recreational activities and as such are effective in stimulating the growth and build of the body's neutralizer and stabilizer muscles responsible for performing actions such as twist, sit, throw and highly effective in preventing possible injury in the event of a fall or in lifting a heavy object by developing core strength.

The full body rowing workout has been popularly recognized as a training method to increase the endurance of professional athletes allowing them to perform a range of explosive movements for extended periods of time without experiencing muscle fatigue. This attribute is generally recognized as an highly important characteristic to the overall health and physical performance of the everyday individual. Measured by increasing the ability of the person to stand for lengthy periods of time, walk for exceptionally long distances, climb several flights of stairs and as a contributory factor to support the participation of a number of sporting activities. Those of which are demanding muscular endurance such as soccer or football. Most men who are typically found to display a lack of muscular endurance are known for experiencing poor posture tiredness and are easily prone to injury.

Full body rowing is known for enhancing the respiratory function of the human body resulting from the engaging of the body's cardio-respiratory system to intake large quantities of oxygen during the exercise activity. Men who have routinely used the rowing machine during their exercise workout have benefited from an improved respiratory function through the reinforcement of the diaphragm and intercostal muscle build increasing the lung capacity and ability to produce the necessary oxygen used in fueling the workout and stimulating muscular growth and recovery.

One of the common mistakes experienced by beginners when performing the full body rowing workout, is the extensive pulling using the arms and shoulders during the rowing motion. The proper technique required for performing the exercise recognizes completing the majority of the workload by driving through each stroke with the legs using body core strength.

Professional athletes and powerlifters today in their training have often focused on the development of core strength which for the average individual is primarily responsible for almost every movement performed on a daily basis, improving balance and stability allowing the average person to lift and carry much heavier loads.

The full body rowing workout like all cardio training exercises is highly effective in achieving fat burning and promoting weight loss in the individual when performed at intervals of high intensity training as opposed to a typical length cardio session.

A typical and effective weight loss program will generally include a vast number of exercises and a range of movements by utilizing the rowing machine for a great fitness experience keeping the body's muscles guessing to stimulating muscular build and core strength development.