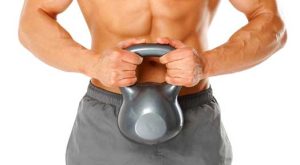 Have you ever noticed an unusual looking handled cannonball sitting in the corner of your local gym. Or maybe you've even seen someone swinging it back and forth and wondered to yourself, what it is that? Well stick around as we are about to introduce you to one of the best known gym-tools to provide you with a total body workout; the kettlebell.

Acknowledged by the American Council of Exercise, the kettlebell when used in during the exercise workout has a momentous impact on the aerobic capacity of the individual, while simultaneously strengthening dynamic balance and core strength.

Below are  two of the more popularly used kettlebell exercises you can perform in less than 15 minutes daily to help tone your muscles for a full body workout.

The Deadlift The deadlift has traditionally been used by professional fitness trainers as a guide to mastering the technique used in performing the kettlebell swing by recruiting your gluteus, hamstrings and core muscles as well as the proper method to begin the swinging of the kettlebell from the hips.

How to perform the Kettlebell Deadlift

▪ First you'll start off by standing in an upright position, feet slightly wider than shoulder-width apart, toes turned outward with the kettlebell on the floor and in front of you.
▪ Position yourself into a squat, pick up the kettlebell and stand up by driving your body weight through your heels, keeping your back straight and chest up.
▪ Squeeze your glutes at the top of the lift, then lower yourself to the ground until the kettlebell is on the ground and at your feet.

The Kettlebell swing This kettlebell exercise also known as the two hand swing instructs you to use your total body strength to move the weighted kettlebell. Try no tot think about the exercise as lifting the kettlebell to your shoulder height, instead focus on using your legs and hips to effortlessly power the kettlebell.

How to Perform the Kettlebell Swing

Kettlebell exercises are a great way to build muscle.

Kettlebell exercises are an excellent way to shock your muscles to build muscular mass while improving your capacity and explosive power from the ground up. You may be wondering if you could substitute the use of the kettlebell with a regular dumbbell. Well the answer is no. The kettlebell is actually considerably much different from the traditional dumbbell due to its distribution of the weight. While the dumbbell distributes its weight evenly on both sides, the kettlebell has the weight centered with a handle above for holding making it more difficult to lift. Having said that, its quite easy to see why so many men today are quick to get on the kettlebell fitness parade, but before you do, there are just a couple of pointers you should consider first.

⁃ Ensure you have at least a minimum of three to four training sessions in the company of a professional fitness trainer. ⁃ During the exercise never use your back to complete the lift, instead engage your legs.