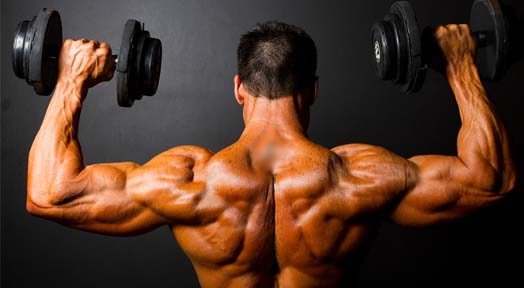 Having a strong back and biceps is undoubtedly one of the best health features of  muscle building that all men want to achieve. A large majority of the existing back workouts today are basically divided into two specific segments aimed at targeting the lower back and upper back muscles accordingly by primarily focusing on the upper back muscles so back and biceps workout is one of the best exercise to work the back.

The Ultimate back and biceps workout

Throughout the fitness industry, the biceps muscles have traditionally been associated with a man's strength and are sometimes referred to as the "epitome of manhood".

Think about it guys, when someone walks up to you asking you to flex your muscles; how do you respond? You flex your biceps, right? The key however to successfully developing those perfect biceps is to target the muscle group from several angles focusing the training by performing a variety of reps for each exercise set.

Most professional gym trainers will often combine selective back and biceps muscle exercises into one successful workout to effect the best training results for each individual.

Get a Proper Warm-Up

We sure by now you already may have realized that before entering any exercise routine it is essential that you perform some type of warm-up routine to prepare your body for the physical stress you're going to put it through. Generally five minutes of light cardio activity should be sufficient to elevate the heart rate to increase the blood flow throughout your body.

Begin the back and biceps workout with the Reverse-Grip Pull down exercise to target your inner lats, performing a single warm-up set consisting of eight to ten reps of the exercise followed by 3 working sets to failure in eight to ten reps.

During the workout you should try focusing on contracting your back muscles as the weight is lowered towards your chest beginning with a lighter load and increasing the weight while decreasing the number of reps.

In the next segment of this workout you're going to perform the Wide-grip Lat Pull Down to target your outer lats. Begin working with a warm-up set of eight to ten reps and continuing into the workout with three working sets to failure by completing ten to fifteen reps.

The primary reason why you are training your lats consecutively in one exercise after the other is due to the fact that each of the exercises are specifically used to target individual segments of your lat muscle.

Now for the biceps or as most men love to say "the Big guns".

The first exercise you are going to use to target the biceps muscles is the Hammer-Grip Dumbbell Curl. Begin the exercise with one warm-up set of twelve to fifteen reps followed by three working sets to failure in ten to fifteen reps. Professional bodybuilders have found that by performing the hammer-grip curl in a neutral position they have successfully been able to not only thicken the biceps brachii muscles but also train their forearm.

The next exercise of this particular workout aimed to additionally target the biceps muscles is known as the Machine Preacher Curls. As with the previous exercises you're going to begin by performing one warm-up set of ten to fifteen reps completing the exercise with three working exercise sets to failure in no more than eight to twelve reps.

You're probably wondering why the workout includes one warm-up exercise set for each exercise. Well the answer is; during the workout to achieve the best results and exercise experience you'll want to prepare the target muscles for the stress impacted while training. This technique will allow you to create a type of shock effect to the muscle groups to produce larger rips throughout the tissue to stimulate more growth.

Finally don't forget your cardio cool down. Fifteen to twenty minutes should be more than adequate for an effective cool down period which we should stress is just as important as warming up and has an added bonus of lowering fat levels throughout the body by improving the calorie burn process.