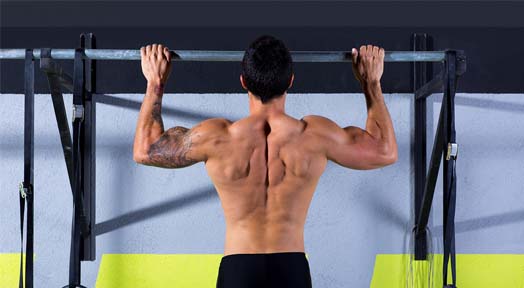 Most men avoid pull-up routine mainly for the fact that they are considered too hard. Regardless of its known difficulty the traditional pull-up exercise routine is a perfect exercise for all fitness levels typically recruiting the largest muscle within the back known as the latissimus dorsi (lats).

Get your technique right

However if you’re able to complete just ten consecutive reps of the exercise recognizing the correct technique you are guaranteed to benefit from one of the most rewarding muscle builds ever achieved in strength training. So check out these tips to perfect your pull-up routine.

You too can benefit from growing your lats with the pull-up. The secret is in the crossing of the bar. Categorized as a full bodyweight exercise, the pull-up routine requires a significantly different proposal than the typical arm curl or bench press.

Unlike traditional bodyweight exercises rather than adjusting the weight you can physically lift according to the training as in the case of a free-weight exercise machine loads are varied according to your physical ability. As such the number of pull-ups you’re going to perform will be strictly in relation to your physical ability. By following this principle what you’re actually doing is ensuring you follow an adequate workout routine according to your fitness level.

Prior to beginning the exercise you going to want to decide on the number of pull-ups you’ll be able to do. You really do not want to begin your training by overtraining your muscles. When you’ve selected an suitable number then you’re ready to begin.

How to do the pull-up exercise

Should you find yourself not strong enough to physically lift your bodyweight to perform the exercise there’s an easy solution to that. The chin-up involving the precisely same movement as the traditional pull-up allows you to grip the bar with an underhand grip recruiting the biceps muscles to complete the lift.

At this point both your palms should be facing each other. This exercise is preferably recommended for individuals with a slightly increased fitness level as the exercise is somewhat more difficult than the chin-up but easier than the pull-up. It is important that when beginning to perform the pull-up you start the exercise with fewer reps to ensure the proper form is maintained.