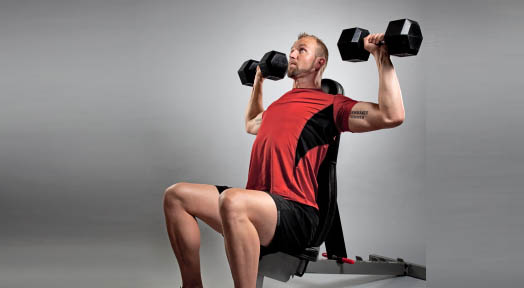 Workouts for tall men. The traditional weight training room has occasionally been referred to as the most feared room to the tall individual training. This is primarily due to the fact that for such individuals to complete their training routines requires stretching themselves at often cumbersome angles to obtain the correct posture. This incorrect positioning often exposes the tall individual to an increased potential risk of injury due to the unavoidable utilizing of poor exercise techniques and incompleted distance the load should travel to complete the motion of the weight-lifting exercise.

The awkward gym situation has for some time been highly infuriating for tall athletes who are forced to consistently modify the motions of their training routines to accommodate their physical barriers. Often times they find themselves looking for customized workouts for tall men.

For the training individual, having extremely long limbs can produce severely unfavorable effects on the starting positions of workout exercises leading to poorly executed exercise techniques. This has resulted in the recognition of isometric exercises which have been used traditionally to allow the person training to maintain a static contraction thus achieving an effective position to perform the exercise. This type of training has been widely used to educate tall men how to properly begin and end a weight-lift.

Isometric exercises have been widely used within the fitness industry in the assistance of taller men by exposing their training routine to a range of static movements over a period of time. Individuals who have experienced some difficulty in achieving the required half-squat position for the lift can begin the exercise with a quarter-squat position gradually lowering themselves to complete the exercise motion. This enables the tall individual to vastly improve the depth of the squat as well as the total range in motion for the exercise in a progressive and in a comfortable manner.

Isometric are not performed in a passive environment but rather are recognized as an active form of training although viewed as static. This is mainly due to the fact that the body of the person performing the exercise is constantly subjected to a full-body tension during the lift position. Many professional tall weightlifters have found that completing fifteen to twenty exercise sets of extreme lifts between fifteen to twenty seconds in a progressive manner while increasing the allotted time with each completed set and decreasing the amount of exercise sets gradually positioning themselves using the correct technique has allowed them to benefit from an effective and complete workout.

Weight training recognizing concentric-only lifts including pin squats and presses are effectively used by training professionals specifically for tall men, as this form of training provides the person training with the advantage of building on the foundation guides of the isometric-hold. Additionally allowing these elongated weight lifters the benefit from the ability to exit forcefully from the starting position on the exercise while ensuring the execution of the proper technique to increase their mass, muscle growth and strength without the concern of lowering the weight used.

Explosive lifting on each rep

Successfully based concentric-only lifts are achieved primarily through acceleration of the body. Training using heavier loads requires the individual to focus on moving the weight as quickly as possible from the start to finish position in exercise sets of between five to ten reps.

Many elongated beginners with their long limbs which have been found to experience some difficulty in altering their motor control and perception. Lifting a weight that is too heavy for a lower rep count can result in possible injury and severe muscle damage. When lifting for an excessive number of reps decrease the training experience at a much faster rate than a person who is of a normal height. As such reps based on mid-ranges generally between five to eight reps are recognized as one of the key factors in a quality weight lifting experience to build muscle mass.