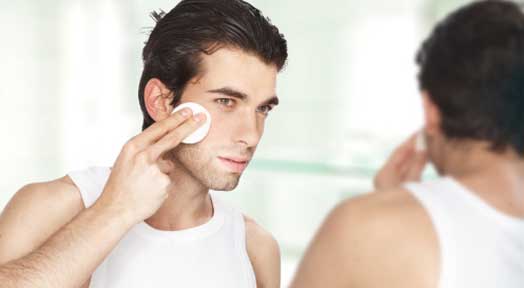 Almost everyone has had to deal with skin blemishes at one time or another. (Those of you who haven’t, rest assured that the rest of us envy you.) And while acne does indeed peak for most people, especially men, during puberty, it’s not the only time it will ever appear.

The reality is that acne isn’t just triggered by youth or diet or even the environment.

In men acne is frequently the result of stress and waning and waxing testosterone levels. You see, as we age, testosterone surges and ebbs – kind of like the tide. During puberty, when it is time for our bodies to make the leap from boyhood to manhood, testosterone floods the system.

Most men get acne early teens and early twenty’s.

The outbreak on most men’s skin between the ages of 14 and 20 can be largely attributed to the vast amounts of testosterone in the bloodstream at any given time. After age 20, testosterone levels plateau, but still remain relatively high.

Men still get acne even when they are in there 40s.

After age 40 however, testosterone levels start to drop, but it’s not like rolling down a hill… it declines then peaks back up then declines some more before peaking again… all in a steady downward progression but not necessarily smoothly. Those peaks can cause sudden and unexpected acne to appear on the face, neck, back chest, shoulders – almost anywhere.

Stress is a major contributor to acne.

The other culprit behind unsightly outbreaks is stress. The older we get, the more worries and responsibilities we all have. It’s part of being a man. But when the stress at work, home, or in other areas of your life starts “getting” to you, it can show up on your skin.

All stress releases cortisol into your system.

This hormone essentially “readies” your body for battle (mental or physical). In men, significant stress can also trigger the release of testosterone as a response to the cortisol – once again, showing up on your face.

So what’s a guy to do? Begin by trying to relax.

Have a cup of coffee, turn on some jazz and chill every once in a while. Get in a good workout at the gym. See a funny movie. Beyond that, work to help control your testosterone levels through diet, exercise and supplements. And, as an extra insurance policy, use a facial cleanser with salicylic acid to gently help rein in oil production and prevent breakouts.