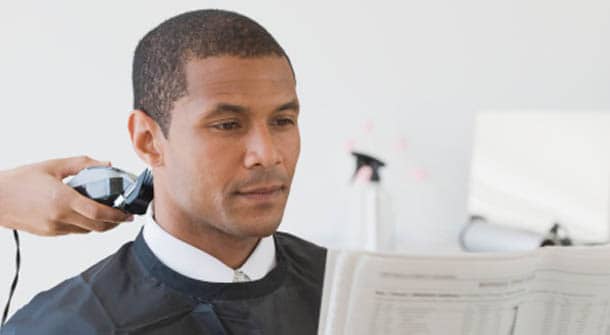 When your hair first starts to thin, maybe it’s just receding from the hairline for now, it isn’t too late to try a messy cut. Leave it a little longer, get layers cut into it, and don’t style it too specifically. You should be able to cover the receding hairline with the longer front locks.

You can create the same effect with a little shorter hair too. Just have the back and sides neatly trimmed and tapered. The top can be shorter. Paste it down the front over the problem area, but muss the top a little. It covers the hairline and is neat in the back and on the sides, but the messy top throws people off the trail of the extra work you did up front.

If you are running into the problem of a bald spot at the back of the head, the most classic way to deal with it is to grow your hair out a little longer and slick it back. That should cover up the trouble spot, and slicked back hair has always had its place in men’s fashion.

Obviously you don’t want to go full faux hawk (you never go full faux hawk), but by cutting the sides shorter and leaving a little extra up top, you can muss the longer part a little and hide those widow’s peaks if you are just starting to lose hair at the temples. Jude Law has been pulling of this look for a while now.

The buzz cut is always a safe option. It is pretty much accepted in all areas of society nowadays. It looks great with a suit if you are a professional. And when your hair is short all over, bald spots don’t stand out as much. Jason Stratham is an example of guy who pulls off the buzz cut smashingly with a suit.

Time to go for the full shave

At some point it will be time to do what needs to be done – break out the straight razor and just start shaving it clean. It says something about a man when he isn’t afraid to shave his head rather than attempt a comb-over. It adds an air of confidence, and maybe taking this step will give you back the confidence that thinning hair might have started to chip away at.