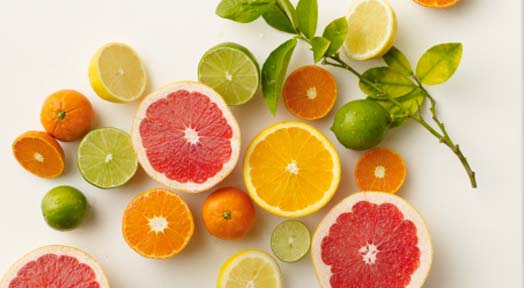 For a long time citrus fruits have been highly recommended as an effective ingredient in a nutritious, healthy and tasty diet. They have been widely recognized as a rich source of vitamins, minerals and dietary fiber are essential and fundamental in the natural growth and development process. Over the years a greater appreciation has been shown for the health benefits of citrus fruits for your body as it has been found that biologically non-nutrient compounds found in citrus fruits have been effective in reducing the risks of many chronic diseases.

Find out the Amazing Benefits of Citrus Fruit

Citrus fruits have been found to be an excellent source of vitamin C. In addition they are like most whole foods that have also been found to contain a vital list of other nutrients which have included glycemic and non-glycemic carbohydrates, calcium, potassium, thiamin, vitamin B and a variety of other phytochemicals.

The main energy producing ingredient contained in citrus fruits is a carbohydrate found as simple sugars, glucose, fructose, and sucrose in addition to citric acid which has been found to produce a minimal amount of energy. Non starch polysaccharides otherwise called dietary fiber it is also found within citrus fruits and has been noted as essential it has the tendency to promote satiety, and reduce the glucose uptake rate effectively preventing the surge of blood glucose levels. They have also been found to interact with the re-absorption of bile acids resulting in the lowering of one’s cholesterol levels.

The vitamin C found in citrus fruits is essential in the formation of collagen which is primary component of the body’s connective tissue. This process has been found to stimulate the development of strong ligaments, tendons, healthy skin and bones, blood vessels and improve healing of wounds as clotting rates are increased simultaneously with tissue repair.

Vitamin C has also been found to be effective in the treatment of stress and anemia.

Contrary to many beliefs, vitamin C does not prevent the common cold but rather has been found to severely shorten the symptom duration.

Known to be a successful antioxidant vitamin C within citrus fruits has been found to prevent cellular damage as it has been effective in the oxidization of fatty acid and protein within the body whereby reducing the occurrence of “free radical” molecules responsible for the development of varying cancers. As such regularly consumed, citrus fruits are an essential part of a healthy diet program with the added benefits of reducing the risks of chronic diseases such as cancer.

The health benefits achieved through the consumption of citrus fruits are vastly seen as essential in a person’s goal to achieve a healthy state of mind and body. Citrus fruits are a great source of carbohydrates, dietary fiber, vitamins and minerals used by people not only as a weight loss supplement but also in the treatment of micronutrient deficiencies such as over nutrition, obesity and other diet related chronic diseases as it plays a vital role as a component for low fat, no sodium diets.

Public health specialists and nutritionists have learnt that the relationship between health and diet in an inseparable one in which an increased emphasis is placed on maintaining a balanced diet in order to effect a healthy body.