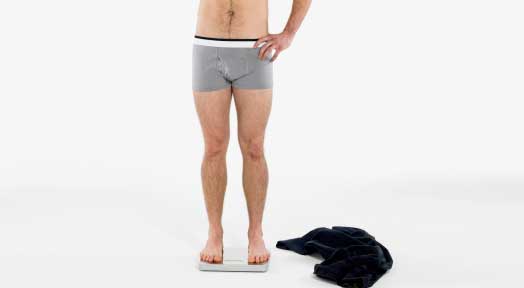 The body fat scale although quite similar to the regular bathroom scale boasts an additional feature of not only weighing your overall body weight but also reported to provide an accurate reading of your body fat percentage.

How well does your body fat scale work?

This feature is extremely useful when determining your body’s composition while dieting noticing that your overall weight remains the same resulting in fat loss and muscle gain.

The body fat scale uses Bioelectrical Impedance Analysis which in effect is the passing of a small safe amount of electrical current through the human tissue within the lower half of the human body. Based on the principle of electricity moving at a faster rate through water as well as muscle tissue and slower through fat; the accuracy of the body fat scale is based on the current moving at a faster rate throughout the muscle and at a slower rate when passing throughout the fatty tissues. So what is measures in effect is resistance by mass. The scale then takes this value of resistance and translates it via a particular step by step mathematical formula to achieve a body fat percentage.

How to read the results

However, the actual reading is not entirely correct as both consumer reports as well as various studies have all come to the conclusion that the body fat scales do not give an accurate reading.

There are several factors which have to be taken into consideration which can impact the gauge to give an inaccurate reading, such factors include: The person’s body type and overall hydration, and even if the person might have sweaty feet or not.

If a person is dehydrated or has the tendency to sweat a lot from exercise, the content of water within the person will not be adequate enough to accommodate a steady flow of electricity essential to the scale to provide an accurate reading. Such conditions will allow the body fat scale to record a body fat value much higher that at actually is. The similar situation exists if a person consumes too much water the body fat measured will appear much less than it actually is.

Weight once a week

In such situations like this it is recommend that a person weighs at least once per week Other affecting factors known to produce inaccurate readings on the body fat scale are; body movement when weighing, as it is recommended that one stays perfectly still during weighing. Foot calluses; studies have revealed that a person who has unusually thick calluses on their feet may prevent the adequate required electrical current from flowing through the body whereby resulting in inaccurate readings.

Having an over muscular toned body can also impact negatively on the body fat scale’s ability to effectively make an accurate calculation relative to the BMI formulas; as having an exceedingly high muscular tone will negatively impact on the weight value.

Factors that lead to results

To effectively utilize the attributes of a body fat scale, one must take a few factors into consideration, such as; weighing at a specific time of day consistently, maintaining a constant volume of food and drink intake per day, weighing directly after exercising, and ensuring that the scale is located in a room having a fairly constant temperature. So the bottom line is these body fat scales can give you an idea if your body fat is trending up or down however the most accurate way to calculate your body fat is still the skin fold caliper. For patients who have undergone any form of heart surgery and have been fitted with a pacemaker or relating device, using the it is not recommended.