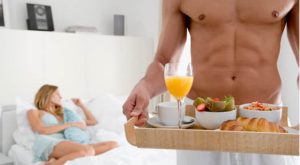 Top tips for Men's Health across the board

Since we mentioned sexual health, and that is undoubtedly what is peaking people's curiosity most, let us look into the topic. Various antioxidants and nutrients in different types of foods serve to protect your reproductive organs from disease and dysfunction. For example, the powerhouse antioxidant lycopene, which is found most concentrated in cooked tomato products, has been clinically shown to reduce risk of prostate cancer in multiple studies. Pumpkin seeds and flax seeds also have a specific type of fiber that has, in preliminary studies, been shown to protect the prostate.

Many healthy foods will also assist with erectile problems. Specifically, we are looking at foods with a type of fiber called "soluble" fiber, which removes cholesterol from the bloodstream, allowing blood to flow better to the extremities. Some excellent sources of this "soluble" fiber include oats, all types of berries, and many fruits and vegetables. As an additional perk, eating foods with more soluble fiber will make your heart healthier and stave off cravings. Remember, animal based foods, such as eggs, meats, and dairy products, do not have fiber.

Other foods on our list seem to have some "stranger" benefits, such as celery. Ever see those "pheromone" perfumes on infomercials that supposedly attract women? Pheromones are scentless hormones that are secreted mainly from the armpits and genital areas that are meant to attract the opposite sex. Well, celery is a natural source of the two pheromones androstenone and androstenol. So, when you eat celery, it is assumed that these pheromones are eventually secreted through the sweat glands and supposedly boost your sexual appeal to others within your scent range. That said, no matter how many pheromones you are releasing, you will probably not be attracting anyone if you decide to walk into a party with celery stalks hanging out of your pockets.

What about overall health?

In 1946, the US Department of Agriculture introduced "The Basic Seven" food guide, which was meant to tell people what foods they should eat to maintain good health. The original graph, differs greatly from today’s version as, some of the foods included were white bread, ice cream, and butter.

Of course, the modern Food Pyramid or plate graph, which has been adapted in its various forms in many countries, has come much further today. Yet, most people still fail to meet the suggested servings of fruits and vegetables. The benefits of including more fruits and vegetables into the diet are limitless, from encouraging a healthy weight to protecting against various forms of cancer.

Some of the "super foods" out there, are spinach, broccoli, and cauliflower. Spinach, besides packing a massive dose of much needed vitamins, minerals, and protein, also has anti-inflammatory benefits as well as a natural plant steroid called ecdysterone. Ecdysterone is interesting, in that, a high doses, has shown to induce increased muscle development in humans. The findings are preliminary, however, and the supplement form of ecdysterone is expensive, so it may just be best to eat more spinach for now.

Broccoli and cauliflower pack similarly impressive servings of fiber and protein, but also have anti-estrogenic properties, which could enhance your "manliness" at the gym and everywhere else. And always make sure to put spices on your foods, which pack a surprising amount of nutrition.