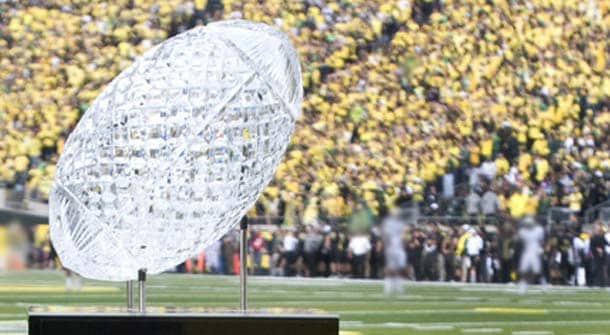 With the 2011 college football season now at a close, can we really say the BCS system is doing it’s job? This past season revealed a remarkable aspect to the BCS that most critics thought it incapable of – a same-conference matchup for the national title between two teams that had played each other previously in the season. Even as the bowl selection process was being finalized, some naysayers believed it just wouldn’t happen that Alabama and LSU would play again, especially after a LSU victory earlier that season.

With College Football Ever have a playoff system?

Still, others argued that by virtue of the SEC and the now long-standing tradition of strength for those two programs, Alabama-LSU was the only logical matchup for the national championship game. They argued that yes, LSU may have won that game, but Alabama offered more of a challenge than any of the other bowl contenders could have possibly delivered.

And at the core of the discussion were those who set up the BCS to begin with – chiming in with the supposed unbiased computer rankings and complex calculation system meant to weed out “personal preference” and create solid pairings based on strength of schedule and scoring ability.

Now after the trampling that LSU received Monday night at the hands of the Crimson tide do we really feel like we witnessed the best two teams in college football? Yes the BCS is still the only game in town to decide who goes to the national championship... but are they off the hook for good? Most would still argue no, as the other bowl matchups like Michigan – Virginia Tech and Clemson – West Virginia were far from marquee games. Especially with teams like Boise State, Houston and Kansas State all turning in strong seasons, it calls into question whether the best-possible bowl games were actually considered. The answer to this is a resounding no. Based on the BCS parameters, the major bowls are dedicated to certain conferences... conferences which have literally “paid” allegiance to the system in one way or another to make sure their conference is represented.

The SEC, PAC-12, Big 12, Big Ten, and ACC are all locked-in to a bowl game, whether their entire conference dominates or whether they look more like Division II teams. No wonder the Boise State’s, Kansas State’s and Houston’s of the world get angry. Their best shot at those prime-time bowls is to get matched against a locked-in opponent, which typically means running the table inside and outside their own conferences. Now, we fully understand that most armchair quarterbacks among us believe that if Boise State, Houston and Kansas State all put together their MVPs and created a team, they’d still fail miserably against an SEC team firing on all cylinders... but the point is the BCS will never let us know for sure, because we’re simply not likely to see it happen.