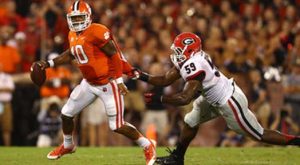 The first full Saturday of college football opening day ended with a solid Victory for the No. 1 Ranked Alabama Crimson tide over Virginia Tech, a Clemson victory over Georgia in a match-up between two top ten teams, an LSU win over TCU, and four shockers involving FCS teams upsetting FBS teams.

Quarterback Tajh Boyd scored five touchdowns to lead No. 8 Clemson to a 38-35 win over No. 5 Georgia. Boyd completed 18-of-30 passes for 270 yards and three TDs and rushed 13 times for 42 more and two more touchdowns. His fourth-quarter throw to Stanton Seckinger from nine yards out put the Tigers up by 10 with 7:40 to play in the game.

Georgia, which got 154 yards rushing on 12 carries from RB Todd Gurley, scored on QB Aaron Murray’s one-yard run with just 1:19 remaining. The Bulldogs ensuing onside kick was recovered by Clemson, which ran out the clock.

The No. 3 rated Oregon Ducks picked up where they left off last year with a whopping 66-3 over Nichols College under new head coach Mark Helfrich. No. 12 LSU dispatched a pesky No. 20 TCU, 37-27, with a 448-yard offensive performance against one of the country’s stronger defenses. Terrence Magee ran for 95 yards and two touchdowns and Alfred Blue add 89 more for the Tigers’ offense which ran for a total of 197. QB Zach Mettenberger went 16-of-32 for 251 yards and one huge TD pass to Jarvis Landry with just over six minutes to play to set the final score.

McNeese State got 207 passing yards from QB Cody Stroud to go with two touchdowns and defeated South Florida, 53-21, to spoil the debut of new USF head coach Willie Taggart. Northern Iowa, another perennial FCS power, shocked Iowa State, 28-20 and, late Saturday night, Eastern Illinois walked out of San Diego with a 40-19 victory over the Aztecs of San Diego State. It was an outstanding weekend of football for FCS schools playing FBS programs.