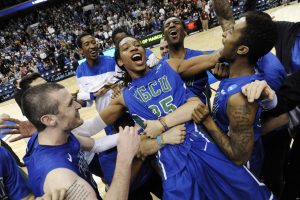 The shocker of the day at the NCAA tournament, and possibly of the entire tourney so far, saw 15th-seed Florida Gulf Coast University beat Georgetown, 78-68, as Sherwood Brown scored 24 points to lead the Eagles to a huge upset. FGCU led 24-22 at the half and led by as many as 19 down the stretch and held off the Hoyas (25-7) for the win. The Eagles are in just their sixth season of Division I basketball. Georgetown’s Otto Porter, the Big East player of the year, was held to just 13 points.

After upsetting Florida in the SEC tournament, Mississippi put on the glass slipper and upset fifth-seeded Wisconsin, 57-46, giving the Rebels their first tournament victory since 2002. Ole Miss guard Marshall Henderson, the SEC’s leading scorer, finished with 19 (17 in the second half) as the Rebels ended the Badgers’ streak of NCAA first round wins at six.

LaSalle also pulled of a shocker defeating fourth-seeded Kansas State, 63-61. The Explorers held an 18-point lead at the half and had fight off a mad comeback by the Wildcats to secure the upset win. Jerrell Wright, who hit three free throws in the final 30 seconds, led all scorers with 21 points.

Minnesota must have heard all the bracketology talk and responded with an easy 83-63 victory over sixth-seeded UCLA. Andre Hollins scored 28 points for the Gophers. The Bruins played with Jordan Adams who broke an ankle in the Pac-12 tournament. UCLA has made the tournament just twice in the last four years and has not advanced past the second round which is bad news for head coach Ben Rowland.

Khalif Wyatt poured in 31 points as Temple pulled out a victory over North Carolina State, 76-72. Lorenzo Brown scored 22 points, had nine assists, and added four rebounds for the Wolfpack, who 30 years ago, were in the midst of a miracle run to the NCAA title.

Doug McDermott proved why he is one of the nation’s best as he scored 27 points and had 11 rebounds as Creighton advanced with a 67-63 win over Cincinnati. The 6-8, two-time Missouri Valley Conference player of the year made all 11 of his free throw attempts. The Blue jays (28-7) now face Duke in the second round on Sunday.

After watching a 16-point lead disappear in the second half, Illinois’ Brandon Paul and D.J. Richardson each hit three-pointers to give the Illini the lead for good with six minutes to go in a 57-49 win over tenth-seed Colorado. Paul led Illinois with 17 points and Askia Booker was the top scorer for the Buffaloes with 14.

Top-seeded Duke had little trouble with underdog Albany winning 73-61 as Seth Curry (26) and Mason Plumlee (23) combined for 49 points. Duke coach Mike Krzyzewski won his 80th NCAA tournament game. In-state rival North Carolina was never able to completely pull ahead but stayed in command throughout much of their game with Villanova, beating the Wildcats, 78-71.

Ohio State won its ninth straight as Sam Thompson had career highs with 20 points and 10 rebounds and the Buckeyes destroyed Iona, 95-70, in first-round action. OSU won its last five regular season games as well as sweeping through the Big Ten tournament.

Head coach Steve Fisher and the San Diego State Aztecs won their third NCAA tourney game in three years with a 70-55 win over Oklahoma. Jamaal Franklin scored 21 points and James Rahon added 17 for the former Michigan coach who has a national title under his belt. The Aztecs will face surprising Florida Gulf Coast in round two on Sunday.

The nation’s leading three-point team, Iowa State, tried something a little different and it paid off with a 76-58 victory over Notre Dame. The Cyclones, who averaged nearly 10 three-pointers per game, turned to center Georges Niang on the inside and the freshman scored 19 points.

The No. 1 seed in the South, Kansas, needed some late free throws to avoid being first top seed to lose to a No. 16 seed in the NCAA tournament. Jayhawk center Jeff Withey scored 17 points as Kansas pulled out a 64-57 win over Western Kentucky. The Hilltoppers’ full-court pressure kept Kansas off-guard all night long. Jamal Crook did it all for WKU finishing with 13 points, nine rebounds, and four assists.

Indiana, the top seed in the East region, had no problem disposing of James Madison winning 83-62. Miami, enjoying its best season in school history, got an easy first-round win, 78-49, over Pacific.