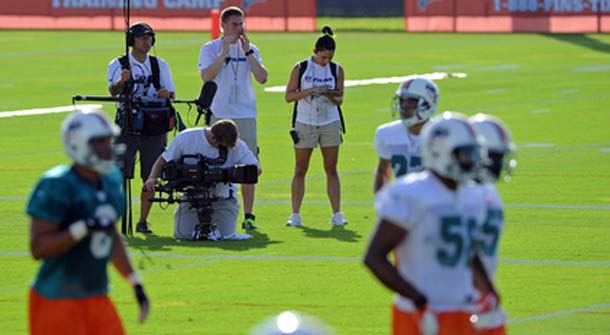 Over the years, there has been much debate about whether it’s in a team’s best interest to participate in the HBO Hard Knocks series, a popular reality sports documentary series which follows an NFL team through its training camp. Of the seven teams who’ve participated so far, three (Ravens - 2001, Bengals - 2009, Jets - 2010) ended up making the playoffs. Four of the teams weren’t so lucky. The Cowboys failed to make the playoffs both times (2002 & 2008) they were featured and the Jaguars (2004) and Chiefs (2007) also sat idly at home come playoff time.

In breaking down the debate, we take a close look at the main pros and cons.

Publicity & Exposure - The program provides a team with increased publicity and exposure. This can actually be a good thing for a mediocre team or a team in rebuilding mode since it may be the only real attention they garner all season. The storylines also build interest in certain players football fans may have normally not cared about. Now that they’ve developed some attachment to them through the series, they will be more likely to follow the team or simply the player(s).

Occasionally there will be an episode or two that’s forgettable. However, for the most part, most episodes provide some form of entertainment. The majority of viewers enjoy watching two players compete for a starting spot or getting a first-hand look at how many NFL players joke or prank one another during training camp.

Distractions - It’s no secret that many NFL veterans moan and groan when they learn about their team’s participation on the show. Many could care less about the exposure or entertainment aspect since they see inclusion as a huge distraction. From their perspective, they don’t want a camera tailing them around the clock. Training camp is hard enough and worrying about cameras capturing locker room talk or uncomfortable moments can be quite stressful.

With the cameras rolling, regular practices often become pre-season games. In other words, players will often push even harder to impress when they know the cameras are around. Sure, coaches want their players to work hard, but not at a price. Going too hard in practice could lead to pre-season injuries on either side of the ball.
All those things considered, would you want your favorite NFL team to participate in HBO’s Hard Knocks series?