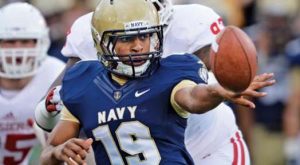 Reynolds, a sophomore, rushed 36 times for 240 yards and now holds the record for most rushing touchdowns by a QB in a single game. He also joins some elite company as he is the ninth QB in NCAA history to rush for 20 touchdowns in a season. With 26 TDs currently, Reynolds needs one more to tie NCAA record holders Collin Klein (Kansas State) and someone Reynolds is very familiar with, Ricky Dobbs, one of the Naval Academy’s finest QBs in history.

San Jose State QB David Fales was no slouch Friday night as he completed 42-of-56 passes for 440 yards and five touchdowns. He became the school’s all-time leader in both passing yards (7,835) and touchdown passes (60). The Spartans, now 5-6, rushed for 160 yards – 98 by Jarrod Lawson – to record 600 total yards for the game. It was a contrast of styles as Navy put up 478 yards of total offense, 432 on the ground.

San Jose State, which led 16-10 at the half, grabbed the lead, 30-24, when Fales hit Tyler Winston with a four-yard TD pass. However, with just seven minutes to play, Reynolds scored on a 38-yard run and Navy regained the lead, 31-30. To make matters worse for the Spartans, William Tuider fumbled on the ensuing drive and Navy recovered around midfield. Reynolds would go on to score his fourth TD and the Middies led 38-30 with just 2:38 remaining.

Fales then marched the Spartans down the field with no timeouts and threw a two-yard TD pass to Kyle Nunn on the game’s final play. With no time on the clock, Fales calmly hit Chandler Jones for the two-point conversion to send the game to overtime.

Navy is bowl eligible and will face rival Army on Dec. 14. San Jose State can become bowl eligible, but must beat unbeaten and 15th-ranked Fresno State next weekend to do so.