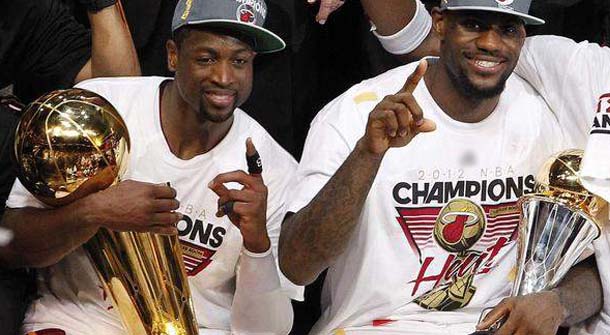 When the season started, few believed the Oklahoma Thunder would make it well into the NBA Playoffs, let alone contend for the title in the NBA Finals. The team was young, hadn’t had much time to develop team chemistry and a team style of play, and the NBA Western Conference competition was fierce.

But both teams made their way through the season with a fair share of hard work. Durant and Westbrook cemented themselves as leading scorers for the Thunder and developed an unselfish style of play that allowed both players to shine. Tremendous support from key players like Ibaka, Kendrick and Harden off the bench made the Thunder a buzzer-to-buzzer threat. The Heat performed largely as advertised – amazing scoring from Wade and James, monster defense and performance in the paint by Bosh. Instrumental play from Battier and hometown veteran, Udonis Haslem was often overlooked by fans, the media, and sometimes, it seemed, other teammates. As Miami started to gel, however, they became unstoppable at their best, and resilient at their worst, overcoming injuries, mismatches and being down in the series.

When the time came for these two teams to showdown, only one would emerge victorious, and in this case it was The Thunder/The Heat. Most assumed it would be an easy Miami cake walk after seeing the first half of Game 1. The Thunder roared back to claim the win at home. The Heat grabbed the next two games – scrapping out Game 2 and perhaps seeing youth get the better of The Thunder in Game 3. But Games 4 and 5 showed a fiercely determined Heat team eager to win the championship at home... The superstars turned in championship-caliber performances, including triple-doubles for LeBron James. But even more impressive (and most would argue turned out to be the deciding factor in both games) was the tremendous scoring turned in by Heat “support” players like Battier, Miller, Haslem, and Chalmers. Indeed, with Mike Miller in double digits for the championship game, along with 5 other Heat Players in double digits, even the league’s leading scorer, Kevin Durant, couldn’t muscle out a win. It is worth mentioning Durant’s 32 points and 11 rebounds were proof we’ll see the Thunder back in the finals again. This is a team that’s maybe only a few years behind Miami in terms of putting the exact right corps of players to go the full distance.

So what else can we expect for the future? Of course, the Heat organization would like to keep this team together... but money will likely be the deciding factor of whether or not that will actually happen. Riley has had a knack for identifying support players eager to win a championship even if they’re not being paid marquee salaries (Haslem and Howard have been prime examples of this, as was former player Alonzo Mourning). OKC on the other hand has already wrapped up contract extensions for many of their top players, including Durant, which should, theoretically keep the Thunder rolling for many seasons. Repeating in any league is difficult... and competition in the East isn’t getting any easier, so it seems doubtful Miami will get back-to-back championships... but then again, most people counted the Heat out early this season and several times throughout the Finals.