Players to Goodell: Get Rid of Replacement Referees and Bring Back the Real Refs 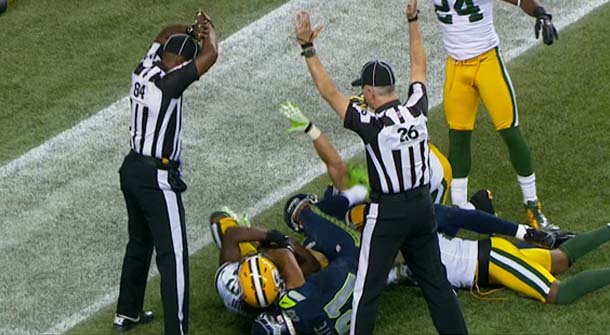 Imagine taking the starting quarterback from any University and without notice telling him he won’t be playing for his team this week; rather he will be starting for the Pittsburgh Steelers. Regardless of talent, this quarterback couldn’t be expected to replace someone like Ben Roethlisberger who is a seasoned NFL veteran, Pro Bowler, and Super Bowl Champion. Essentially this is what the NFL has done to the replacement referees. Referees like Ed Hochuli and Mike Carey are seasoned NFL veterans, they are the best at what they do and whether the NFL wants to admit that they rely as much on the officials to call a solid game as anything else, without the best officials in place the game is not the same as we are witnessing. Some of the replacement referees have little training and an even smaller amount of experience, yet they were thrust onto the biggest stage in North American sports.

Now although it is the NFL’s fault and not the fault of the replacement officials it does not change the fact that the officiating has been very poor. We highlighted what we thought were the worst five calls of the year to this point.

5. In Week 2 Ike Taylor of The Pittsburgh Steelers was called for Pass Interference without as much as making contact with not only the receiver but he didn’t make contact with any Jets player on the play. This had no bearing on the game but you can’t help but wonder how an NFL official can make such a bad call.

4. Sunday Night Football’s Week 3 game featured the New England Patriots and Baltimore Ravens, two tough premier AFC football teams. Things were chippy between the two from the get go and on several occasions closed fist punches were thrown, not a thing was done about it by the officials. This was not the only game where this went on but it sends a message to the players to play dirty and you may not even be called for it. Almost as if it seems the replacement referees aren’t being respected enough to even worry about the rules.

3. The San Francisco 49ers were basically given five timeouts in the second half of their game in Week 3 against the Minnesota Vikings. With one timeout left 49ers Coach Jim Harbaugh called a timeout, after the timeout Harbaugh convinced the officials that he wanted to take back the timeout and use it toward a challenge and they said sure why not. As if that was not bad enough only a few moments later the 49ers were granted another Coach’s challenge, each which would have cost them an additional timeout.

2. After a 15 yard penalty was called the officials marked off 27 yards for the offense in an overtime game between The Detroit Lions and The Tennessee Titans. The penalty was called with Tennessee in possession at their own 44 yard line, however the officials marked off the 15 yards from the 44 yard line of The Detroit Lions thus granting an extra 12 yards to the Titans. This penalty helped setup a game winning field goal by Tennessee just a few moments later. This was a debacle we thought would and could not be topped by the officials, unfortunately we were mistaken.

1. With no time left on the clock Seattle Seahawks rookie quarterback Russell Wilson heaved up a prayer of a pass toward the corner of the end zone. When the ball came down a number of Green Bay Packer defenders were waiting along with two Seahawk receivers. MD Jennings appeared to come down with the ball in the end zone which would have resulted in a touchback and ended the ball game. However the call was a touchdown as Seattle’s Golden Tate was wrestling for the ball which Jennings clearly came down with.

Not only was this a loss for the Green Bay Packers but a loss in general for the NFL. By placing untrained NFL Officials in the game the NFL is putting an inferior product on the field. The five calls above were bad but there were countless others worth mention, and we have just reached the end of week 3. Like we stated we do not blame the replacement referees because we imagine they are trying their best, but when calls like this happen it makes the NFL seem like any old league when it took this long to build it up into so much more than that. Hopefully this was the straw that broke the camel’s back and we see the real officials in week 4.