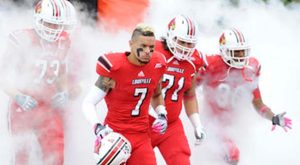 The memo that said the Big East was the weak link in the BCS bowl system obviously did not make its way to Louisville. Head coach Charlie Strong’s Cardinals completely outplayed Florida on its way to a 33-23 victory over the third-ranked Gators in the Allstate Sugar Bowl.

The onslaught started on the game’s very first play when Terell Floyd picked off Florida QB Jeff Driskell and returned the errant pass 38 yards for a Cardinals’ touchdown. It continued after a Florida three-and-out when Louisville’s dynamic sophomore quarterback, Teddy Bridgewater, hit B.J. Butler for a 23-yard gain to the Gator one-yard line and on the very next play, Jeremy Wright pounded his way into the end zone to put the 21st-ranked Cardinals up 14-0.

The Gators, led by second-year head coach Will Muschamp, entered the game as the third-best team in the nation in scoring defense giving up just 12.9 points per game. Louisville was clearly not intimidated with Bridgewater (20-for-32, 266 yards passing, 2 TD) and RB Wright (25 carries, 84 yards, 1 TD) leading the way on offense and stellar play by a Louisville defense which forced numerous three-and-outs by the Florida offense.

Louisville, which had to beat Rutgers in its Big East finale to snag the BCS bowl bid, led 33-10 well into the fourth quarter before a 100-yard kickoff return by Andre Dubose gave the Gators some life. Driskell then led the Gators down the field and completed a five-yard pass to TE Kent Taylor for a touchdown with 2:13 remaining, but Florida’s third attempt at an onside kick failed and the Cardinals were able to run out the clock.

Florida, which was never really in the game from the outset, had scored on a Matt Jones one-yard run at the end of the first half. To start the second half, Muschamp elected to attempt an onside kick which was recovered by Louisville. To make matters worse, the Gators were flagged for two personal fouls on the play giving Bridgewater and the Cardinal offense the ball at the Florida 19-yard line. The star QB promptly tossed a 19-yard TD pass to Damian Copeland on the first play of the second half.

Strong, who was the defensive coordinator at Florida during the Urban Meyer era, watched his defense limit Florida to just 286 total yards (111 on the ground) and was aided by a number of Gator mistakes. Driskell threw two interceptions, the Gators lost a fumble, and committed nine penalties resulting in 98 yards lost.

Driskell finished 16-of-29 for 175 yards passing while leading rusher Mike Gillislee carried just nine times and ended the game with only 48 yards rushing for the Gators. Louisville was a two-touchdown underdog going into the game and became the first team in the FBS to score a touchdown within the first 15 seconds of each half.