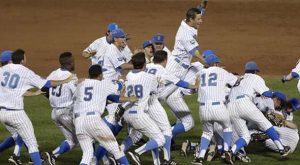 The Bruins (49-17) are the fourth straight team to sweep the College World Series finals. They went 10-0 in the tournament and finished the season with 11 straight victories. The Bruins won their 109th national championship, the most by any school in the NCAA.

The eight Bruins runs were a shock for a team that batted just .227 in the CWS. That is the lowest average since teams went away from wood bats. UCLA scored just 19 runs in the last five games, the fewest by a champion since 1950.

The win gives the Pac-12 two straight titles. Last year’s champion was Arizona. The league has 17 baseball titles, the most of any conference. Mississippi State was the sixth straight SEC school to make it to the finals. The school has never won a national championship.

UCLA was the third place finisher in the Pac-12, finishing behind Oregon State, who also qualified for the CWS, and Oregon. They were one of the weakest hitting teams in the nation (.247 on the season) and did not produce a lot of offense. But, the Bruins got hot at the right time giving up just four runs in the final five games, a CWS record for the fewest runs allowed in the metal bat era.

Vander Tuig won his fourth straight postseason start, striking out six and giving up just one walk. He gave up just one earned run over his last 21 1/3 innings. His teammate and the Bruins’ No. 1 starter, Adam Plutko, was named the CWS Most Outstanding Player. Plutko beat LSU in the Bruins’ opening game of the CWS and won Game 1 of the finals versus Mississippi State. He yielded just two runs in 13 innings on the mound.