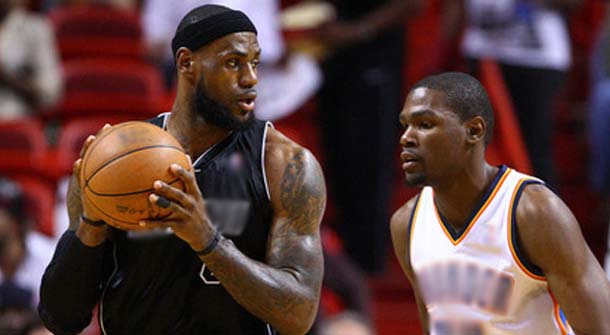 The dust settled on Boston and Miami in the Eastern Conference Finals... with the Heat scrapping out big game 6 and game 7 wins. Oklahoma City made it a series with the Spurs. We have two great teams left on the NBA Finals. Being from Florida and not too far from Miami, I’m happy to see the Heat contain the Celtics and then handle one of the two best teams from the west. I personally am glad they are playing the Thunder as the experience of the Spurs would have been tough to beat.

Who do you want to see hoist the Larry O’Brien Championship Trophy? If the Heat are going to win 7 championships as King James promised when he brought his game and act to South Beach they better get it accomplished this year. Can they win it without a full-strength Bosh? The Celtics were on their last legs with the big three all getting long in the tooth. The OKC Thunder are young and talented. You better believe they will be a force for years to come. As it turns out, the old dog Spurs were in kind of the same boat as the Celtics; their days were numbered and their years were long.

It makes for an exciting finish to the season. Both teams are shooting for the same goal but are in different places as organizations. I still remember fondly the day my brother and I drove to Winston Salem to watch Tim Duncan his senior year. My best childhood friend played basketball for Wofford College and they were playing Wake Forest. We sat behind the Wofford bench and watched Tim Duncan up close as my best friend attempted to defend him. I can’t get out of my head how in control Duncan was on the court. He looked so effortless with his moves. He didn’t seem to waste any effort. He had this quiet confidence about him and made it easy to root for him. Ironically that game ended his double double streak in college. My buddy likes to say he shut Tim down but truth be told the Demon Deacon coach was so frustrated with his team that night and by their effort he sat the starters most of the game and played the backups. It made for a somewhat competitive game and any time the score was to close for comfort Coach Odom would trot back in Duncan and the boys.

Only time will tell if any of the players on the Heat or Thunder will rise to the same level as Duncan and his post-season strength year after year after year. Certainly, there’s a lot of talent on both sides of the matchup, but both teams have struggled from time to time with leadership. One thing is certain however – youth prevailed in the conference championships. Let’s see what happens here in the last few games. Have fun watching the NBA Finals and hopefully your team has a chance to be crowned World Champions.