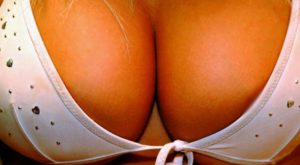 How many times have you caught yourself checking out a girl, thinking about making a move, but wondering if she have real boobs from fake. Not all guys care, but if it makes a difference to you, how can you tell without coming out and asking her? Unless you and a buddy run the “my friend is a plastic surgeon and can tell if breasts are real or not just by touching them” scam, you need some long distance intel. Here are a few ways to figure out how to tell real boobs from fake from afar.

The rules on how to tell real boobs from fake

One of the definite ways to know is by location on her body. If her breasts are nestled tightly against each other or have enough room for you to put a whole fist in between them, that's not really natural. There should be some space, but not too much. That's just poor placement by a surgeon. Same thing if he puts them too high. The breasts, as general rule, should be at around armpit level.

Next is the jiggle test. If you see her run, jump, dance vigorously, or ride a mechanical bull, there should be no doubt. The real deal moves around. Breasts are mostly fat after all. Fakes will hold steady. You may even be able to tell if she simply leans forward. Real breasts will hang down. Even when she isn't moving, if they just sit upright like two big round melons, there is probably more there than she was born with.

There are a few tougher to see signs. Usually you won't see nipples if you haven't already gotten the girl, but if it's really cold in the room, or if there is a wet t shirt contest going on, you may be able to sneak a peek to find out if they are too high, too low, or pointing in different directions. You may also spot scars or stretch marks from the surgery if she has on a low cut top or raises her arms with a tank top on.

Final thought on the real boobs from fake debate

Obviously this isn't foolproof. She may just have a great bra that holds everything up just right. They may naturally be slightly out of position. Sometimes a slim girl does have over-sized breasts. But those are the exceptions. Most of the time if they are out of position, don't move with her body, and don't look the correct size, then they are bought and paid for, which may or may not be a bad thing. But you can at least consider yourself an expert.