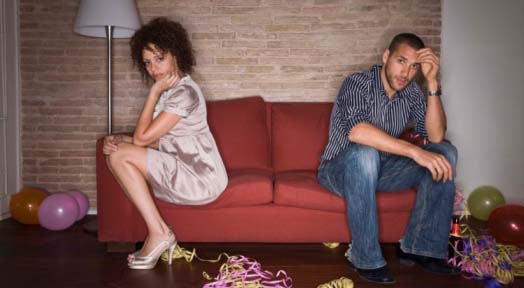 How to spot if you have relationship troubles, Very few couples will go through an entire relationship span without a single argument. Those that do often cite a lack of spark as reason to end things. The fact is argument, as part of a healthy dialogue, is essential to the growth of a relationship. However, it can be difficult, even for two perfectly-matched individuals, to tackle relationship troubles without any difficulty whatsoever. Typically, couples mistake difficult issues for unsolvable ones, failing to understand that some issues take time and dedication to work through completely.

Let’s take a common example... one person in a relationship likes to plan things; the other likes to wing it. The pair butts heads a lot. Over time, the disagreement might even escalate to shouting or refusal to participate in activities with the other. Advice to compromise seems unrealistic to both parties because each has to give something up. Eventually, the couple may choose to move on rather than come to a shared understanding. However, in many cases, all that was necessary was a conversation that follows a few ground rules:

1. Begin statements with “I” rather than “you.”

In all honesty, the only person you can speak for is yourself. You can only guess at another person’s feelings or motivations, even if you’ve known them for years. You’ll make a lot more progress if you both reserve your comments to how certain situations or actions make you personally feel.

2. No name calling. No screaming.

In the heat of the moment it is all too say things you’ll regret. However, even with an apology, there’s no way to take back the hurt those words inflicted. This will end up doing more damage to your relationship than the core issue. If you’re both not able to discuss the issue like adults rather than teenagers, take some time to cool off and then make sure you both discuss the issue instead of sweeping it under the rug until next time.

Don’t pick a fight with your partner while you’re on the phone, at work, out to dinner or amongst friends and family. Set aside time for you both to sit down, face-to-face and talk things through.

4. It takes however long it takes.

Don’t expect complete resolution after a single 30-minute talk. Relationship troubles are often multi-layered. As you resolve one layer, another one emerges, which often gives couples the perception that they’re not getting anywhere. Remaining dedicated to working through each layer is the only way to gain true resolution. Likewise, allow yourselves to table a discussion (especially if it is getting heated or frustrating) and return to it another day.

Try your best to stay on point. Wandering to other problems or making accusations unrelated to the discussion causes more problems than it fixes.

No hitting below the belt applies to relationships as well as boxing. Don’t purposely try to hit a nerve with your partner in an effort to make them feel bad or doubt themselves. Remember, relationship issues are not about deciding a winner and loser of the argument or choosing who was right. You can both win and you can both be right if you work together to find a solution you can both be happy with.