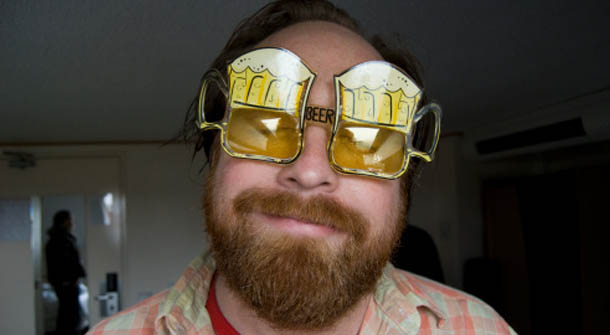 You’re out all night having a wild time and end up scoring big time with this really hot chick, or so you think… That’s until you wake up the next day and realize you had your beer goggles on the night before and the hot chick is more like a hot mess. For those of you who don’t know beer goggles are, it’s a common term for when you find a person more attractive while under the influence of alcohol. You might think it can't happen to you but it's more common than you think, People who drink too much some time see what they want to see in their mind.

The actual science of beer goggles

Before most people chalked it up to “just one of those things” or a punch line in a joke however there is new scientific evidence out there that actually explains the beer goggles phenomenon and it has to do with something called bilateral symmetry.

What is Bilateral Symmetry

Bilateral symmetry is the degree of symmetry in your physical appearance. For example if you draw a line down the human body the right for the most part mirrors the left. Scientists believe that due to natural selection people with a higher level of symmetry are considered most attractive. When London’s Roehampton University conducted a study they found a majority of participants involved found objects more symmetrical or perhaps less asymmetrical as their intake of alcohol increased.

Also when shown pictures of both symmetrical and unsymmetrical faces the test group that drank alcohol were far less likely to detect lack of symmetry than their sober counterparts. Hence the reasoning that yes beer goggles are real. So blame it on the a-a-a-a-a-alcohol now you have science to back you up. As far as deleting all pictures from that evening and stopping the merciless teasing from your friends you are on your own.