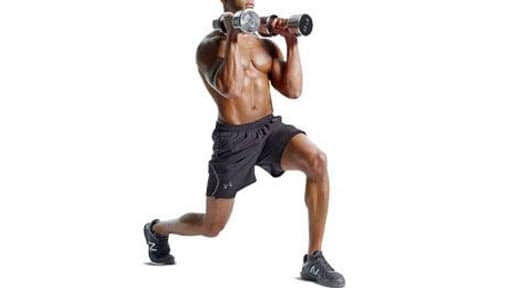 The lunge in any training workout is simply defined as taking one giant step. This exercise is often performed with or without the use of weights. Occasionally the lunge has been used in strength training and cardiovascular workouts with dumbbells positioned at the sides, shoulder level, or with the use of a barbell placed behind the neck and on the shoulders. The lunge has been used in a number of training routines to strengthen upper leg muscles, quadriceps and even muscles within the butt. the dumbbell side lunge exercise is one of the most effect exercise.

How to perform the traditional Dumbbell Lunge

The exercise is performed similarly with the use of the right leg to be completed in the number of reps determined by the exercise sets of the specific training workout.

This exercise requires a substantial amount of balance and should be avoided by individuals who have been known to have a history of imbalance. As a result a modified version Dumbbell Lunge can be performed by the individual suffering from such an imbalance by using a fixed object such as a rail for support. It is important that the exercise never be performed while placing a barbell on the back if there has been a history of back problems as this could lead to severe injury.

The Reverse Dumbbell Lunge has been used in strength training to specifically target the triceps muscles while simultaneously activating almost every muscle group within the lower body such as the hamstrings, gluteus and calf muscles.

The dumbbell side lunge exercise and Touch is a variant of the typical dumbbell lunge and is performed with the individual standing in an upright position firmly gripping a pair of dumbbells in the hammer grip, holding them at arm's length at both sides.