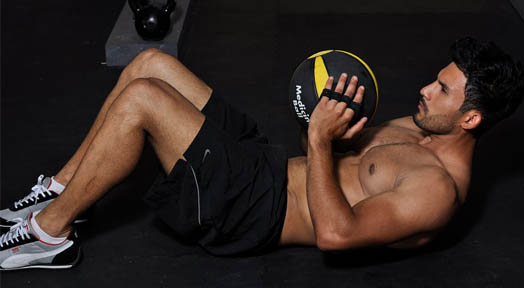 Strength training recognizing the use of exercises requiring barbells and dumbbells is an effective and fine way to gain muscle mass tone. However core strength recognized as a primary achievement in the fitness industry is seldom achieved through the traditional training methods. medicine ball crunch workout training is a great way to gain muscle mass.

The use of medicine balls, once a widely used training medium is gradually making it’s way back into the fitness industry where it is used effectively to develop core strength of the individual.

Due to the turning, twisting and bending movement of the medicine ball, the training workouts assisted with the use of the medicine ball has been found to effectively stress the majority of the muscle groups that are not targeted during the conventional training exercises.

How to add the med ball to your training

Medicine ball core strength training incorporates full-body movements, rather than individual body parts such as in the leg or arm curl and as such have been found as an ideal training method to develop trunk or core strength within the individual.

Having a developed core strength allow the individual to effectively transfer energy throughout the body to perform a wide range of training exercises as by achieving stronger abdominal and back muscles, the person is able to exercise for longer periods without fatigue.

What are the Health Benefits?

Medicine ball core strength training has been observed to take a toll on the body’s central nervous system along with the connective tissues which recognizes the slow movements of the exercises when training.

Some of the medic ball core strength training exercises include, the Downward Chop, Squat and Toss, and the Side Chop.

The Downward Chop is performed as the individual stands in an upright position with both feet shoulder-width apart. The medicine ball is positioned behind the individual’s head and then swung in a motion down and between the legs simulating the motion of chopping a piece of wood. Both knees should be slightly bent while completing the motion of bringing the ball towards the legs, similar to the football hike. The medicine ball is then swung in an upward motion as it is once again positioned behind the individual’s head straightening the body in an upright position as the movement is completed. Beginners are often recommended to start this exercise at a much slower pace gradually increasing the intensity as they advance.

The Squat and Toss is performed with the individual beginning the exercise standing in a similar position as in the Downward Chop with both feet apart at shoulder-width. The knees should be slightly bent and the upper body in a vertical and upright position. The medicine ball is placed at chest level as the individual begins to lower the body in a squat and the legs then extended upright while throwing the ball directly overhead at a low height.

The individual then catches the ball absorbing the impact using the wrists and elbows then the ball is brought to the front of the chest completing one rep.

In the Side Chop exercise, a similar stance is taken as in the Downward Chop and the Squat and Toes, however the medicine ball is held with both hands above the right shoulder. The ball is then brought across the body and then down towards the left knee and then across the body to the starting position completing the first rep.

Each exercise is completed in 10 reps using either a 6 or 8 pound medicine ball twice per week.