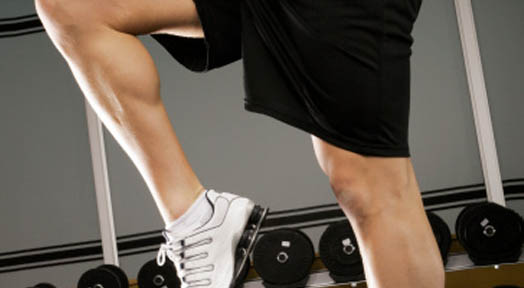 The calves workout blaster, For many weight lifters, calves workout is probably one of, if not the most neglected aspect of the body with respect to weight training. Several fitness enthusiasts have just resorted to the age old myth that their underdeveloped calves are as a direct result of hereditary genetics.

The sad truth to this misconception is, many people just do not train their calves enough and some are just not knowledgeable as to how they should do a calves workout. When training the calves, attaining the correct form is key to successfully improving muscle mass and performance within the calves. This delicate form requires the athlete to stand on the toes as high as possibly and then going down as low as possible.

Fitness experts have often suggested that when using weights to train the calves, one should use a weight of approximately twice the body weight of the person. One of the many reasons why the calves are specifically difficult in developing is due to the fact that they are used daily on almost every occasion including running and walking, which has resulted in their natural toughness. It is because of this toughness that to successfully develop this muscle group will require using a heavier than normal weight set for the workout while maintaining the correct form.

How to get started

As with any of the workout, stretching prior to the beginning of the workout is vitally important in preparing the muscle groups for the intense exercise routine and will allow for better conditioning to achieve a much better workout that will really blast the calves to increase their muscle mass and strength. One of the best exercises used to increase muscular density within the calves is the Standing Calf Raises which when performed using the correct form is one of the most successful training workouts used to achieve excellent results in calf development and performance. Many strength training enthusiasts have found that by completing reps within the 10 to 15 rep sets and using a weight of between 300 to 500 pounds maintaining the correct form successfully increases their calf muscles to a great extent.

These are typically used during the workout routine as one of the most effective ways to shape the movement of the calves. Though not quite the workout used to increase the mass of the calves, this routine is effective in developing the inner and outer regions of the calves giving then a distinctive wider appearance. Fitness professionals generally recommend completing this exercise using weights of no more than 200 pounds performing rep sets of 25 to 30. Donkey Raises though seemingly becoming unpopular at local gyms have been used as an effective workout exercise when performed using the same principles based within the Standing Calf Raises.

Using one leg Calf Raises within the exercise routine allows the exerciser to maintain a comfortable position to attain a higher level of control thus being able to focus on one leg at a time. This routine is typically performed while using a dumbbell of between 50 to 60 pounds held in the right hand while standing on the right leg and performing the calf raising exercise using the left leg. Completing this exercise in a slower motion in a rep set of about 15 to 20 reps adds a type of resistance training to the workout which increase the amount of calories burned.

The calves like any other area of the body must be trained with as much intensity to improve their performance and muscle growth as they when used in collaboration with the other targeted and trained muscle groups have been observed to increase overall core strength and performance of the body to effortlessly complete daily tasks and promote great health.