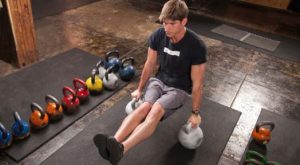 Mention the words cross training and non-athletic types will either think you’re talking about footwear or that you’re simply not dedicated to a single fitness endeavor. Mention the same words to a serious athlete and you’ll have started an exciting conversation about sharing workouts, techniques and goals.

Cross training started when dedicated single-sport athletes began getting bored in the off season or worse, suffering a repetitive-use injury that impacted their performances during the competitive season. Coaches, trainers and sports medicine experts agreed these bodies needed a break from the punishment of year-round training, without sacrificing their peak conditioning. The idea of training in a different, yet complementary, sport during the offseason became a popular trend that still exists today. Wide receivers in football found they could keep working their jumping and flexibility while playing basketball... but without the bulk of pads and the potential for hard-hitting defense. Runners found that hitting the pool gave their joints a rest from pounding the pavement while still keeping their cardiovascular conditioning at its best.

For the common man, cross training has its benefits, too. You’re more likely to stick with a workout plan that’s diverse in its activities, you’re less prone to injuries and you can augment your results by working supporting muscle groups and systems. A good rule of thumb is to build a routine with the following: