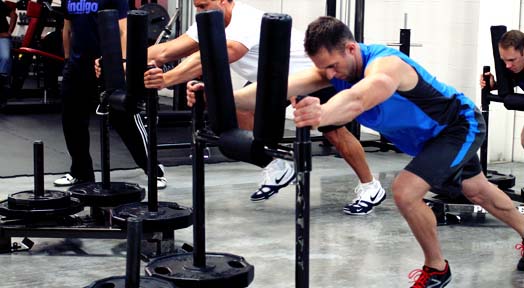 In the fitness world today, The Prowler push has been increasingly becoming a dominant attribute used in the training routine of a large majority of professional bodybuilders and athletes.

How to perfect the prowler push

The prowler often referred to as difficult, efficient and highly effective is one of the best known conditioning devices used for men who are looking to get right to the core focus of in-depth strength training.

One of the basic theologies of the prowler push can be best learned by watching the teamwork displayed by the offensive linemen during a Football game. These massive players are fully aware that when one person misses an assignment, the potential for the quarterback to be sacked increases exponentially often resulting in the loss of yards. The sect to be learned from these offensive linemen is how to successfully build their lower body strength to effect that explosive surge of power the moment the ball is handed off to the quarterback.

How to do the Prowler Push

The prowler push commonly viewed as a sled, allows the person training to increase the required weight of the sled by consecutively adding several weights then pushing the sled in a similar manner to the seven-man sled often seen during the big guys on a high school team shoving the sled around the field during practice.

Hence the prowler sled has been widely introduced as an effective means of training in the pursuit of developing stronger muscles and improved cardiovascular function within the body used by a large number of professional sport facilities strongman gyms and CrossFit boxes to increase the performance of their athletes and powerlifters.

The majority of the exercises performed with the assistance of the prowler are simple and easily conducted due to the non-involvement of any eccentric movements including lowering of the weights in a controlled environment such as in the downward segment of the traditional bench press. Men who are beginners to the prowler as such can effectively dive right into the exercise routine loading up the prowler with the weight plated and pushing the sled for a fantastic workout.

The prowler sled workout has been used not only by professional athletes and powerlifters but additionally by bodybuilders and professional sports athletes to increase the potential of the lower body to execute a massive amount of force to the ground resulting in enhanced acceleration and quick response.

1. The prowler sled push is performed by the individual gripping the poles of the sled with both hands at chest level.

2. Then maintaining the body at an angle of about forty-five degrees driving the legs towards the ground to execute a forward sprint effectively pushing the prowler sled.

3. During the push the back should be aligned with the neck and head ensuring the core is kept tight. The prowler sled push is typically performed in sets of five and pushed for a distance of about thirty yards.

The backward prowler walk provides the individual with an effective workout known for targeting the quadriceps which are a key component for enhancing speed in addition to the creating that often coveted above the knee teardrop appearance.

The backward prowler walk is often performed in five exercise sets pushing for a distance of thirty yards.