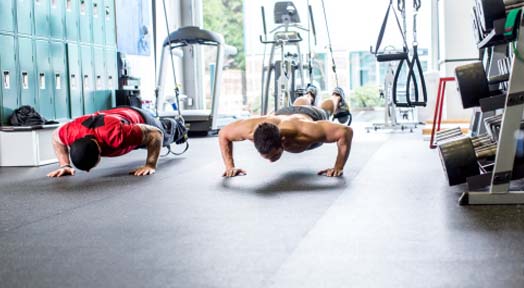 Fitness professionals have traditionally hailed the push up progression as the crown jewel of the bodyweight exercises as they are routinely used in several training programs to effectively target the muscles located in the pectorals(chest), the triceps muscles located in the rear of the arms, along with the anterior deltoids found within the shoulders.

Contrasting variations recognized by the placement of the hands while performing the exercise will effectively determine the level of intensity each targeted muscle group is stressed. One great way to train using the push up is called push up progression training.

1. positioning the arms at an angle of ninety degrees to the body and focus more on the chest and pectoral muscles.

2. increase the number of reps according to their experience level.

3. However professional bodybuilders have found that in their training strength increase was obtained by moving through a progression of more difficult exercises.

Simple push-up progression will include:

⁃ Each progression consisting of three exercise sets of no more than fifteen minutes scheduling a rest period in-between sets of two to five minutes.

⁃ The individual should train a single progression alternatively for at least three times each week recognizing a rest day in-between training days.

⁃ Men who are able to complete a fresh progression on the first attempt are urged to push to the next progression of the following workout and not remain satisfied with easily completing the set.

Beginners in their training are urged to start at the progressive point they are most comfortable with respective to their fitness level. Professional trainers will often begin training individuals to complete six sets of six reps of the selected exercise within the training workout. Beginning with the first exercise set as a warm up set the routine is followed by the individual going back to about three levels of the progression completing the variation for no more than six reps executing each set to the point of exhaustion.

The traditional progression used by most professional trainers will often involve the routine beginning with the wall push-up. Individuals being able to complete three sets of fifteen wall push-ups will progress to the inclined push-up. This push up is easily performed by positioning the individual at an angle of about forty-five degrees to the floor using an exercise bench or stairs and completing three sets of fifteen inclined push-ups.

The next exercise in the series is known as the box push up which is performed on the knees placing both the spine and legs at an angle of ninety degrees completing three sets of fifteen box push-ups moving on to the three quarter or modified push-ups positioning both knees on the floor while aligning the spine and legs to be completed in three sets of fifteen reps. The standard or traditional push up would be performed next in a similar number of sets and reps to complete the push up progression program workout.