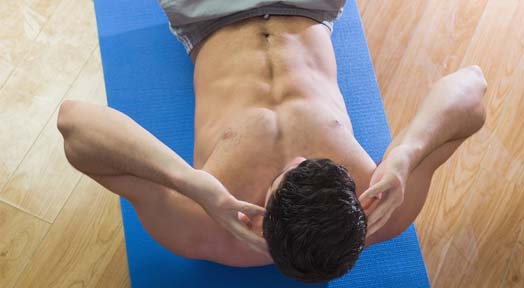 It has often been said that to get the perfect six-pack abs requires a vast amount of mental strength and dedication not just during training sessions at the local gym or at home, but also by maintaining a healthy and proper diet. Before you consider reading any further you should be fully aware that successful six pack abs workout training without having a suitable diet plan is virtually impossible especially when trying to achieve your six pack. Like we said before a six pack abs exercise workout take lots of dedication

Training to Get Six Pack Abs

Now that we've established this critical point we'll not look at just how are you going to change your eating habits to maintain a proper diet. As a customary rule most experienced trainers will provide a specific guide for their recruits to follow to jumpstart their dietary changes and boost the rate of metabolism.

One such plan would include:

Go back to the basics

You'll complete this six pack abs workout training by performing three to four sets of six basic exercises for a specified number of reps three to four times per week for a total daily workout time of forty-five to sixty minutes.
As a customary rule, begin your workout with a warmup activity of ten to fifteen minutes of a cardio exercise such as running or walking.

How to perform the Prone knee to opposite elbow:

Rest for another thirty seconds, you've earned it.

Complete the exercise in three to four sets of ten to fifteen reps and then take another thirty second break.

Your fourth exercise for the six-pack training workout will be the push-up. This exercise needs no introduction and should be performed in three to four sets, each consisting of ten to fifteen reps.
Rest for thirty seconds.

How to perform the Swiss ball hamstring curls:

The final exercise for this workout will be the split overhead press using a pair of weighted dumbbells.

How to perform the split overhead press: