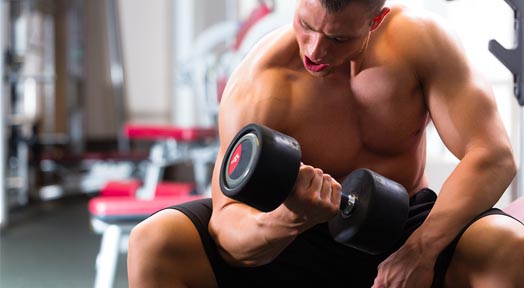 Mixing up your lifting routine is vital for any muscle building regimen for strength gain. We’ve covered the topics of dropsets, supersets and 1 ½ Reps. Now is the grand-daddy of them all. The GIANT Sets. And yes, we will be capitalizing the word GIANT every time for effect.

Giant set for strength is easy, but it requires a little preparation. Select 3-4 different exercises you want to use for the same body part. For one “round” of a giant set, you would do one set of the 1st exercise, then move right into another set for the 2nd exercise, and still without stopping or rest in between, go right into another set for the 3rd exercise. For example, let’s use Chest. You’d start out with a barbell press (8-10 reps), then right into a DB Press, then right into a DB Fly! It may sound exhausted just thinking about it but that is one example of ONE GIANT SET.

Obviously, you won’t be able to use the same weights you would normally use, so plan accordingly. As for rep scheme, we would advise you to try to get in at least 8 reps per exercise in the giant set round. Just keep in mind, at the end it will be extremely difficult to hit 8 reps.

To get started you would do 3 exercises in a giant set, but you don’t need to limit yourself to only those 3. If you feel that you get better results from higher volume, then by all means, add a fourth or fifth exercises to the mix. Keep in mind, though, that three to four exercises in a giant sets done 3-4 “rounds” should more than adequately tax that body part for the day. Any more than that would probably lead to overtraining – especially for a natural athlete.

Set up your station for strength gains

Now, unlike the other intensity techniques, this one may be a little harder than most. Not necessarily because the pain is so excruciating (although it certainly can be), but because it may be difficult to line up the exercises back to back without some unsuspecting gym patron taking your  weights or machine. As long as you aren’t training in the evening during the gym rush hour, you should be ok. Just throw a towel or hat on what you’re going to use and you should be ok.

There you have it. Yet another tool in your tool box! It’s up to you to use these tools to build the physique you want. And get your muscle building regimen for strength gain on.