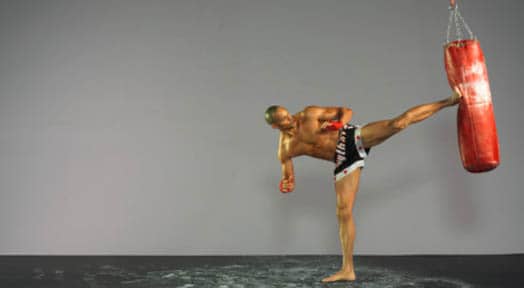 The word “Muay-Thai” when translated to the English language effectively means the art of Eight Limbs, or Thai Boxing. The sport has often been referred to as one of the most brutal combative stand-up martial arts sports using a combination of powerful kicks, and punches using the feet, elbows, knees and even the forehead the Muay Thai workout is one of the most grueling exercise.

Originally founded in the depths of Southeast Asia regions of Thailand the sport historically grew from the initial art of what was known in ancient Thailand as muay born, a method of unarmed combat typically performed by the Siamese soldiers upon the loss of their physical weapons during battle. The art of fighting found in Muay Thai has been used for centuries as a most effective measure in martial arts combat which is primarily one of the reasons for it’s success as a combat sport used by many professionals in the renown Mixed Martial Arts contests.

It is a common observation that most if not all fighters achieve their fitness plateau after competing in a variety of sport activities during their childhood years. The good news is you do not have to be a contestant in the Mixed Martial Arts to train like one.

How to do Muay Thai Training

Most championship fights in Muay Thai will consist of five main rounds to be completed by each contestant. Preparing for entrance in the ring is characteristically performed by what has been referred to as a Ring-Ready Workout which generally comprises of five distinctive routines each consisting of no more than three minutes each followed by a rest period of no more than sixty seconds.

The workout begins with a 5 minute warm up by performing the jump rope exercises. This exercise allows the body to perform a warm up routine to prepare the muscles for the upcoming workout without consuming available energy, thus allowing the body to relax, and mentally focus on the workout.

The typical Muay Thai workout is as follows:

This is performed by standing with your feet slightly apart placing both hands on the ground. The feet are kicked backwards so that your head is perfectly aligned with your feet keeping the abdominal muscles tight. By bringing the feet towards the hands the body is brought to an erect position. This is followed by a right roundhouse kick and then a left roundhouse kick. The basic roundhouse kick is performed by pivoting on either the right or left leg rotating on the ball of the foot keeping the hips perpendicular to the floor. The arm is effectively positioned on the same side as the pivoting leg and should be held closely against the ribs and in close proximity to the face in self-defense. Thus the arm on the kicking leg is used as a supportive measure to power the attack while rotating.

Using a recommended weight of no more than 5 pound per hand this exercise is performed by using a series of continuous jabs, punches and uppercuts.

The Abdominal Exercise with Elbow Strikes

It is performed by beginning with the commonly used sit-up position for the abdominal exercise, however the motion is completed by twisting the body to bring the elbows between both knees. This motion creates the elbow strike.

The squat is performed in the motion simulating the sitting position in a chair. Both the hands should reflect a fighting position typically positioned up and in front of the face. The exercise is then performed by standing and extending the leg into a kick, alternating both the left and right leg occasionally during each motion.

The uppercuts with resistance band

The person will typically stand in the Muay-Thai stance using resistance bands under the front foot and performing a series of uppercuts and jabs rotating the body.

The Abdominal into Jab-Cross

It begins with the user in the traditional sit up position. The exercise is performed by sitting up while twisting to a jab position then reversing the twist motion completing the jab before returning to the starting position.

The Push-up to Elbow Strike

This exercise is performed by beginning the typical strong arm push-up position, bending the right arm towards the ceiling leading with the elbow at the top of the push-up then returning to the starting position repeating with the left arm.

These exercises are performed within a specific sequence to achieve the desired and effective results and when executed correctly provides the user with a high frequency cardiovascular workout similar to the type used by the professional Muay Thai fighter.