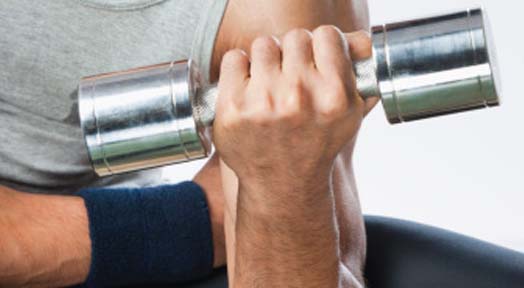 If you’re like most guys that exercise and workout, then the chances are that you’re probably aiming for a leaner more muscular physique, with relatively low body fat levels, and pretty high muscle mass levels. If so, then not surprisingly, you’re most definitely not alone which is why so many guys actually work out almost exclusively with weights rather than cardio machines. Whether you’re training to be a bodybuilder, or just want to look better in a tight t-shirt or with your top off in the summer, it’s safe to say that without training, you’ll look like crap. It’s unfortunate, but it is what it is so in this article we are going to take a look at exercises for stronger wrists forearms workout curls. And how you can use stronger wrists to build muscle.

Wrist curls can be performed using either a barbell, or with dumbbells. To perform this exercise you should sit on a chair or a bench, with your forearms resting on your knees. Next, you’ll need to grab a set of dumbbells or a barbell with an underhand grip, with your palms facing upwards. You’ll next need to relax your palms so that they fall downwards as far as possible towards the ground, before raising the bar or dumbbells back upwards and back towards you, all the while making sure you keep your forearms down on your knees. To complete one rep, you’ll simply need to return the dumbbells or barbell down towards the floor.

To perform this exercise, simply do exactly the same as described above for the wrist curls, only rather than holding the barbell or the dumbbell with an underhand grip, you’ll instead hold them with an overhand grip instead.

A lot of boxers and MMA fighters use this exercise, as well as a number of conditioning coaches. To perform this exercise you’ll need a stick with a hardwearing secure piece of rope attached to the middle, and a weight attached to the other end of the rope. You should then grab this stick with an overhand grip, on both ends of the stick, so left hand, on one end, right hand on the other. Next, you need to roll the rope around the stick, using only your wrists and your forearms. You should do this until the weight has lifted up and reached the stick, before unrolling it again until all of the rope has been unwound.