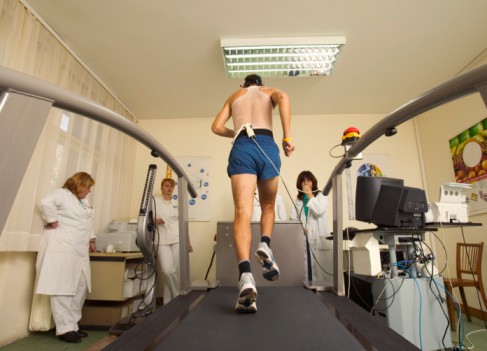 If you haven’t heard about V02 max yet it’s the scientific measurement that determines an athlete’s capacity to perform continuous exercise and the limit of an individual’s aerobic endurance. V02 max is expressed as milliliters of oxygen used per minute per kilo of body mass. Increased intensity leads to increased oxygen intake.

V02 measures the exact point at which your oxygen intake doesn’t increase along with the increased intensity of an exercise. In less scientific terms yours is where you hit “the wall” so to speak. It’s the pain point in testing where you move from aerobic metabolism to anaerobic metabolism.

How is it measured

V02 max is generally studied in a sports laboratory by exercise physiologists using very sophisticated equipment. A treadmill stress test is performed and the subject is hooked up to multiple sensors along with an oxygen mask to measure your output versus intake.

The more practical way for most people to measure their personal V02 max is through a field test. A good start is the Balke V02 max test. Here they have a formula in which you run all out for 15 minutes then plug the total distance covered in to a formula to come out with your specific number. Track & Field athletes’ ages 18-39 generally average between a max V02 of 60 - 85 so the average athletic male in that age range would be around 50 give or take.

Factors for a good V02 Max

Studies have shown that genetics also play a factor in an individual’s V02 level and that it steadily decreases with age. It’s a great measure of athletic ability and stamina however it doesn’t necessarily measure athletic success. If you are interested in increasing your V02 stick with high intensity aerobic and cardio exercise with high intensity intervals such as wind sprints and cross country skiing.