Four Moustache Styles for a Man with Style 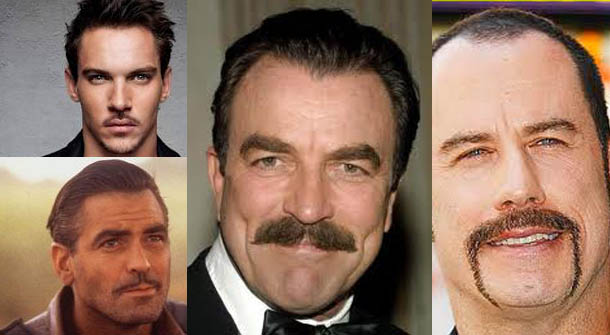 For many men the moustache styles is a great way to give a little style and panache to their look without going overboard with outlandish clothes, hair styles, etc. It can be a statement piece or a simple yet handsome addition to a look that speaks of style and sophistication. The moustache can come in many different styles, some that are an instant hit and others that leave much to be desired; take a look at these four moustache styles for a man with style that can enhance your look with minimal fuss.

Moustache styles for a man with style

This thinly styled moustache that has a defined slant from the middle to ends has been seen for ages from ladies man George Clooney to Hollywood classics like Clark Gable. With a little trimming and a little know-how, this moustache is a great way to add a bit of sophistication and style to any look without requiring a lot of upkeep or expert grooming.

Though this look isn’t for everyone, with a little precise trimming and upkeep the moustache can be a true statement piece that gives you a unique look. It can anything from a full, bushy moustache such as Hulk Hogan’s to a thinner, more styled version such as John Travolta; the trick is to fine the right balance that works with your face and your personal style.

This moustache became popular in the 60’s when rock stars like Jimi Henrix and the Beatles made it famous. The look is can either be thin or full and bushy, but the distinctive part of it is allowing it to grow until the ends reach out to the middle of the cheeks.

Done right, this thin moustache can look debonair and sophisticated, giving a look of refinement and style without you having to even really try. Though it doesn’t take a lot of skill to create the look, it does require a fair amount of upkeep as you need to continuously trim this sucker to keep the thin, stylized shape. Be careful as there is a thin line between sophisticated and creepy with this look.