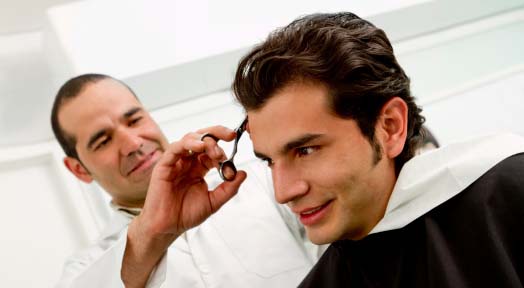 Timeless hairstyles for men that wont outdated. Everybody knows the mullet is out dated and probably should have never come into existence in the first place, but there are certain hair styles every man can pull off regardless of the generation. If you’ve always wanted a classic hairstyle that will never go out of style consider our list for the top timeless hairstyles for men.

Slicked back is a timeless hairstyles for men that can be found on everyone from Leo DiCaprio to Robert DeNiro. It is a classic, classy, and stylish hairstyle no matter who chooses to wear it. When a man wears his hair slicked back he exudes a confidence and sophistication that is unsurpassed by his counterparts. He resembles the most interesting man in the world (AKA Dos Equis guy), and isn’t afraid to let you know where he’s been.

To get the look, brush back your hair and use a pomade or wax to hold it in place. It works best on medium to short length hair, and if you have fine hair use a volumizer to avoid looking greasy and creepy.

No we aren’t referring to the Biber, the 70s shag is the classy man’s way of looking less uptight but still handsome and sophisticated. The Shag was popular during the Scooby-Do television show and right up until modern years. A-list celebrities like Owen Wilson, David Beckham and Johnny Depp have all sported this do and its popularity isn’t going away anytime soon.

To get the look, first grow your hair out to about medium length. Once it is long enough you can then hire a skilled barber with experience cutting layers into the shag look to get your hair properly cut. Once it is cut you can maintain the look by dabbing a bit of wax onto the ends of your hair to keep it in check.

No longer exclusive to military men, the crew cut is easy to maintain while being equally as classy. Short, trimmed, groomed, and to the point the crew cut is a look you can find on young and old men alike. Women like the cut because it keeps their man looking groomed and polished, while men like the look because it’s easy and out of their face.

To get the look, simply go to the barber and ask for a crew cut, it’s virtually impossible to screw up this cut so your girlfriend could probably accomplish