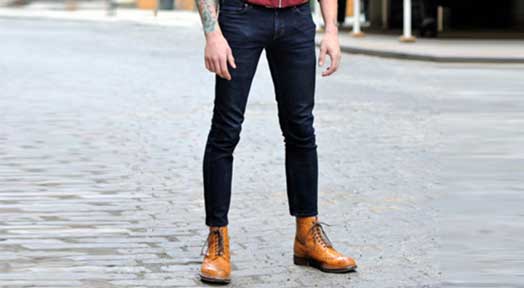 Of course, this style of dress is something most men should steer far and clear from for various reasons, though a few get lost in the latest styles and don’t realize how tragic they look. To help you avoid that stigma we have put together 4 hipster styles men should never wear to give you an idea of the fashion mistakes prevalent in the “hipster movement”.

This little hipster style is all the rage and you can find men all over the country doing this from celebrities like Justin Timberlake and NBA players like Lebron James to the everyday man. Oftentimes they’re big, bulky and a bit geeky. They’re supposed to make you look “geek chic”, but really just end up making you look like an idiot wearing glasses when he doesn’t need to. So, the next time you thing about trying out this hipster trend… don’t.

Seen on such celebrities as Jason Lee, this hipster-esque style is all about the effortlessly cool ‘staches of rock legends of the 60’s & 70’s like David Crosby and Frank Zappa. While for them it looks good on them, they’re rock legends after all, it doesn’t look all that great on guys like you and me. If you want a mustache go for it, but don’t try to grow one just because it “in fashion” because of hipsters.

This hipster style is just a plain “NO” for about 99% of men because really who can successfully pull this look off? Not even actor Russell Brand can make this look good. The look is all about tight, formfitting jeans that conform to the legs and show off a man’s package whether he really wants to show it off or not. They are rarely forgiving, so for those guys who have a little extra padding this hipster trend is especially a “NO!”

Actor Johnny Depp is especially known for this hipster style that gives off the appearance of being “too cool” to care. Sure women all over the world love him, but for the average guy this look is liable to get you a few disgusted looks from women or a few not so subtle hints to take a shower. A good middle ground is going for long hair that is clean, but casually styled. Women love long hair, but you have to find a middle ground away from the “hipster” way of doing things