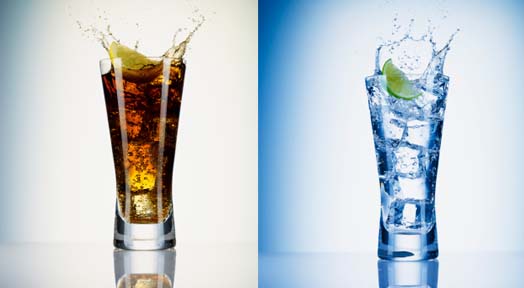 Carbonated beverages, cola in particular has been responsible to reductions in the density of the bones. It has been observed however that this loss in density is not associated with the carbonation. Researchers have concluded that people who were found to drink a lot of of cola displayed weaker bone structure generally because their levels of calcium intake through their diet was extremely low. Carbon dioxide when dissolved in water forms a small amount of carbonic acid allowing the water to have a slightly acidic nature. Human teeth when soaked in various carbonated waters were not affected in any harmful manner but rather it was discovered that calcium deposits contained within the water acted as a buffer to the carbonic acid thus protecting the enamel of the teeth.

Flavored soda water on the other hand was found to have a more devastating effect. The chemicals used in achieving the various colors and desired taste made the water develop a more acidic nature which resulted in severe dental erosion of the enamel of the teeth. These characteristic were highly visible in Coke and Pepsi sodas. In an experiment, baby teeth were placed in a vail of Coke. Within a few days, they largely disappeared confirming the theory. However drinking club soda or mineral water with no coloring will not damage the tooth enamel.

Carbonated water may cause you to have gaseous reactions in the form of indigestion relief but will not pose any threat to a person’s stomach. On the contrary many people have found that drinking a bit of carbonated water on an upset stomach provided some relief from their symptoms. During a study, 12 people were taken suffering from chronic indigestion.

They were then divided into two groups. Over the course of the next few days one group was given still water while the other was given carbonated water on a daily basis. A report was gathered two weeks later which found that the group which drank carbonated water expressed relief from their indigestion in addition to lower constipation occurrence than the group which drank water.

Many people have found that in situations where a person is suffering from conditions such as acid reflux which makes a person burp, it is often advised to refrain from drinking any carbonated beverages such as seltzer and mineral water as they have the strong tendency increase the risk to burp which in effect will worsen the condition.

Drinking water with your meals to dilute existing stomach acid will never work as many have the tendency to believe. Nor will drinking ice water after each meal will cause a person to develop colon cancer as ice water or not is quickly brought to the existing body temperature once it is consumed. It is also true that by the body increasing the ice water to its temperature will burn more calories.

When all is said and done, soda water and other such as carbonated waters have been the victims of negative publicity and unfounded research clouded by myths. Carbonated water in itself is not harmful but rather provided the same effects as regular water providing many benefits including relief from constipation. In addition, there have been many documented events where such carbonated waters respective of their source have been found to contain many healthy minerals that strengthen our bone structure, density and teeth.