Gynecomastia: The Causes, and Treatments 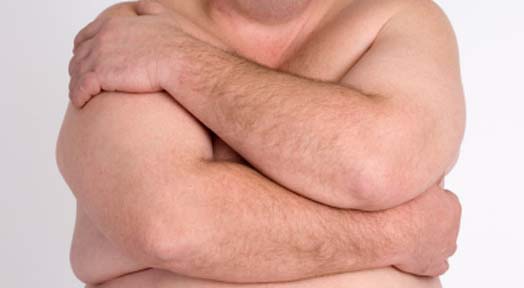 Let’s face it, as men, for many of us, our bodies are things which we take pride in, and that we look to improve upon whenever we possibly can. When it comes to an embarrassing physique, it’s probably safe to say that man boobs, or ‘moobs’ as they’re sometimes referred to as, are up there as some of the most embarrassing body parts a man could ever be unlucky enough to suffer from. Ask any man whether he’d rather have flabby saggy breasts or rock hard pectoral muscles, and you can probably imagine what he’d say. Now, technically speaking, the correct term for man boobs is ‘gynecomastia’ and this condition is actually pretty common, pretty serious psychologically for a number of men, and is also treatable and avoidable.

Gynecomastia occurs when fatty deposits begin to build up in the chest of a man, causing him to store fat, giving him the appearance of having breasts. Typically, the first signs of gyno become visible around the nipples, causing them to look puffy and slightly pointy. As it’s fat that causes the increase in size, it isn’t surprising to learn that eating fatty foods can lead to gyno. The more fat we consume, the more fat we then gain, which will often be stored in the chest, which then results in man boobs forming.

Drinking too much alcohol on a regular basis can also result in gynecomastia, due to the fact that the alcohol actually lowers the dominant male sexual hormone, testosterone, and increases estrogen, which is actually the dominant female hormone, still present in men, only in much smaller doses than in females. As estrogen levels rise, hormones can begin to become imbalanced, and as the forming of breasts can be one of the side effects of increased estrogen levels, many heavy drinkers often find themselves suffering with gynecomastia.

Steroids and other hormones

Many bodybuilders actually suffer from Gyno, due to the fact that they use performance enhancing drugs and hormones to improve their physiques. Testosterone levels again, actually drop, and estrogen levels rise once again, which as you know, can cause Gyno. To counteract some of these side effects, bodybuilders then use more drugs or hormones, and often use a PCT (Post Cycle Therapy) to help minimize the chances of gyno and other side effects. Drugs known as Clomid or Nolvadex are two of the most common forms of PCT used by bodybuilders.

Now, as far as treatments are concerned, there are certainly options to consider. A couple of the most obvious ones would be to lose weight, eat less fat, and drink less alcohol. If gynecomastia is the result of a hormonal imbalance however, Doctors can prescribe Hormone Replacement Therapy, and other similar treatments. Make sure that you seek medical advice if you do intend on, going via this route.