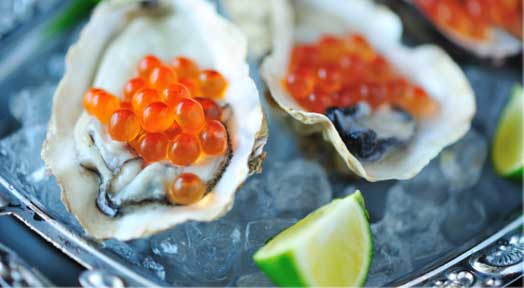 Sure, Vitamin C and hand washing are still at the top of the list for limiting your exposure to cold and flu germs, but a few natural immune boosters added to everyday diet (tasty ones at that) can up your immune response.

Natural Immune Boosters to add to your diet

For instance, instead of popping those unpleasant-tasting zinc lozenges or sprays, you can get zing in its natural form from a variety of delicious protein sources. Zinc increases the production of white blood cells, helping create a larger army to defend against germy intruders. And since excessive levels of zinc can inhibit immune function, getting it from a natural source like food is a wise alternative to overdoing it with over-the-counter preparations.

Oysters are incredibly high in zinc, offering a powerful 75 milligrams of zinc in a serving of just a half-dozen oysters. Raw, steamed or Rockefeller, you get a powerful dose of immune strength. Crab, beef, dark meat turkey and beans all contribute zinc also – although in smaller amounts ranging from 2 milligrams to 10 milligrams per serving.

Garlic, which everyone loves, boosts production of the ‘killer cells’ that target and digest bacteria and viruses. It also increases the efficiency of antibody production, in part because garlic is also a powerful antioxidant that reduces free-radicals in the bloodstream, giving less of a foothold to invading germs. And, although evidence is somewhat controversial regarding to what extent, some early research indicates garlic may also play an important role in detoxifying the body and preventing cancer.

The Mighty Sea for Immunity

Like the idea of oysters for the immune system? Then you’ll also like to hear that tuna, red snapper, lobster, shrimp and lamb chops are all rich sources of selenium which stimulates production of natural ‘killer cells’ and mobilizes cancer-fighting cells to ward off infection.

Additionally, while you’re enjoying lean seafood, you’ll also be taking in a lot of omega 3 fatty acids which have been linked to reduced incidence of respiratory infections and regulating inflammatory response so that it doesn’t become overblown or uncomfortable (as often happens with sinus infections and bronchitis-like conditions)