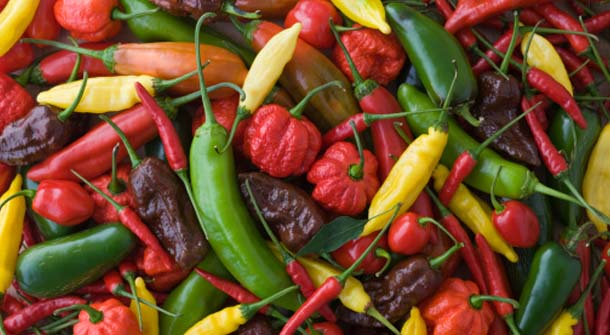 Are jalapenos just not doing it for you anymore? We seem to have an obsession with extreme flavor, and spicy is definitely at the extreme end of the spectrum. What peppers can you upgrade to if you want to live on the edge and get a thrill out of your meals? Here are a few of the world's spiciest peppers. These are not for the weak of mouth... or stomach... or backside (they have to come out eventually). these are some of the hottest peppers.

What determines the hottest peppers?

The Scoville Heat chart is the main method of measuring spiciest peppers against each other. Just so you have a means of comparison, let's start with those jalapenos you now view as being for sissies. Jalapenos can range anywhere from 3,500 to 8,000 Scoville Heat Units (SHU). With that in mind, let's compare a couple of other peppers you can pick up at most grocery stores. Serrano peppers are basically the next level up. They pick up where jalapenos leave off at 8,000 SHU and can get as hot as 23,000. But if you're looking for the world's spiciest pepper, you aren't even in the ball park yet.

Can you handle the Cayenne Pepper?

Do you like to sprinkle cayenne pepper on your meals? You're climbing a little higher up the chart now. A whole cayenne pepper weighs in at 30,000 SHU and tops off at about 50,000. We all know what you're here for though. Let's get into the 6 figure peppers. The hottest pepper you're going to pick up in the average grocery store is a habanero. Habanero peppers have a huge kick ranging anywhere from 200,000 to 350,000 SHU. This is a pepper that can really put the fifth alarm in your chili. But were not anywhere near the top yet.

Before we break out the champions, consider this. US grade pepper spray weighs in at 2-5.3 million SHU. Exposure causes burning to not only the eyes, but the whole face, and uncontrollable coughing basically rendering a person immobile for us long as 4 hours. With that in mind, I encourage you not to try these peppers at home.

The Naga Viper was the world's spiciest pepper according to the 2011 Guiness Book of World Records. The Scoville rating is 1.35 million units.

The terrifying Trinidad Scorpion Butch T pepper isn't even the hottest pepper from Trinidad and Tobago anymore. But it topped that charts at one time with a rating of 1.47 million SHU. If one of these ends up in your mouth, prepare for about 15 minutes of agony no matter what you do to quench the fire.

The 7 Pod Douglah is next. At 1.86 million SHU it is in the realm of dangerous. Make sure you have nothing to do the rest of the day if you bite into one. You'll need about three hours to recover from your error in judgment.

Who wins the race?

The Trinidad Scorpion Morouga Blend tops the chart at over 2 million SHU. When you first bite into this pepper you will believe that you are a champion. Then the fire will build and build. It cannot be put out. You will suffer the shame and agony of writhing in pain and crying like a little girl for what will feel like an eternity, but will probably just be the better part of a day. Don't say I didn't warn you.