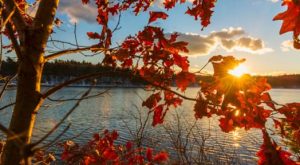 If you don't want to be stuck with everyone and their kids at the beach or theme parks, then summer vacations are not for you. Maybe you would prefer a fall vacation. Another great thing about fall vacations is that it isn't peak seasons for most businesses, so rooms and tickets to events are often cheaper. Plus, as the weather cools off, there are many outdoor festivals to attend. So here are some locations you'll want to consider if you decide to travel in Autumn.

What are the best fall vacations?

If you plan on sticking to the United States for your travels then you have to be thinking about taking a drive up to New England. The fall colors are some of the best that the nation has to offer. Inns have cheaper rates as the weather gets colder. It's perfect for a relaxing getaway. Vermont usually hits peak season during the second week of October. New Hampshire trees can sometimes reach their peak at the beginning of the month. You can catch the Fall Foliage Festival in Massachusetts during early October.

If you love apples the you'll want to head to Pennsylvania in during one of the first couple of weekends in October. That's when the National Apple Harvest Festival takes place. You can head to Wellfleet, Massachusetts if you love seafood, and shellfish in particular, to catch the annual oyster festival. Do you like wine? How about chile peppers? An annual festival in Santa Fe, New Mexico celebrates both and features wine from dozens of wineries.

Oktoberfest in Germany or the Netherlands

Regardless of what you want from your fall vacation, there are options that will appeal to you.