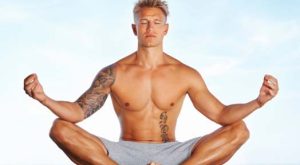 Taking a traditionally Eastern approach to health and fitness techniques is rapidly becoming a popular novelty within Western countries during the last few years. One of these specific practices includes the use of meditation techniques to cultivate and increase energy levels within the body. One of these techniques used is a Chinese meditation known as qigong which incorporates specific breathing techniques along with graceful bodily motion to increase the Chi or Qi energy throughout the body.

This similar concept has been practiced worldwide by Yoga enthusiasts through a similar concept known as prana. The Chinese have recognized Chi as a type of life force contained within the breathing of a person. A person's ability to control their breath allows them to optimize the continuous movement of this Chi energy to increase their state of health and longevity. Such meditational breathing techniques are typically associated with certain exercise techniques aimed at increasing this energy flow, flexibility of the body, balance and overall strength.

One specific form of mediation practiced widely within western countries is known as Tai Chi. Also considered a form of martial arts Tai Chi is practiced by a number of people within all age categories to increase health, strength and decrease stress levels. By using either Qigong, or Tai Chi along with other meditative physical fitness forms including yoga have been found to provide the users with several benefits including:

By learning the art of mediation including the practice of deep breathing can allow a person to effectively reduce their stress levels thus improving their ability to handle anxiety resulting in the overcoming of associated problems such as stress eating disorder which leave to weight gain and high blood pressure.

Improving the breathing practices through meditation will increase the amount of oxygen supplied to the blood stream within the body increasing their metabolism, muscle tone and repair from exercise routines and several other bodily functions.

Meditation like many other forms of Eastern physical arts is practiced in a variety of forms or selective group of bodily motions from one set of patterns to the other. Typically divided into two specific practices of internal and external meditation, internal techniques are relative to the mental aspect while the external technique relates to the art of physical and gentle movements. Such gentle movements are generally recommended for beginners who tend to be less active or physically incapable with respect to certain movements while a more challenging approach is reserved for more advanced and physically capable students.

The art of meditation allows the person to tune their bodies to achieve a higher level of self confidence thus developing a less critical and stressful relationship between the body and mind allowing them to pursue a healthier lifestyle thus accepting themselves without any unrealistic criticism. For many fitness enthusiasts, reduction in stress is one of the key factors to allow them to combine both their efforts of health improvement and mental stability to improve their overall results of their exercise routine.