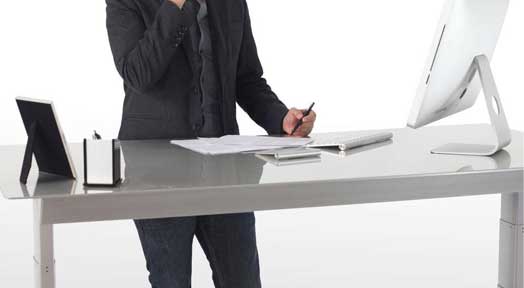 If you're old enough, you probably remember an episode of the hit cable tv show, The Office where Dwight brags about the benefits of his stand up workstation, but is soon trying to disguise that he's resting on a stool. All comedy aside, is it reasonable to have a stand up workstation? Do you really want to be on your feet all day? Here are some things to know about standing up on the job.

Stand up workstations, are they right for you?

The studies keep saying we can't sit as much as we do at work. Kidney problems, back problems, even weight problems, all seem to be related to long periods of sitting. It doesn't matter if you go to the gym every day, perform cardio regularly, and have the heart of an ox. You can't undo all of the damage of sitting. But does that mean that a stand up workstation is the right option?

How much is too much standing?

Of course, standing all day has its downsides too. Feet get sore. It doesn't really reduce lower back pain even though it's better for your upper back and neck. Legs get tired. So what is the solution? There are office stations that allow you to adjust between sitting and standing without having to move all your stuff. Many office workers who tested these workstations out found that they sat for less than an hour a day when given the option. Many also felt that they not only were more comfortable but also felt more productive, and some were even less stressed. So standing workstations that are convertible seem more feasible.

Some things to consider include heath issues with standing. First of all, standing instead of sitting doesn't seem to have any effect on something like cancer. Also, standing poses its own health risks. Your blood pressure increases to reach your extremities when you stand. The sustained pressure of standing all day can lead to arteriosclerosis. So there has to be some sitting time also. Just try not to sit for more than an hour at a time.

To Sit or to Stand?

The battle rages on whether sitting or standing at work is optimal. As with so many other things, the answer probably lies somewhere between the two opposing arguments. I personally am more of a laying down on the job kind of guy. But I'll get off my lounge chair with my lap desk and walk about some. You may find that you can work well from a standing work station. Just be sure to not constantly be on your feet.