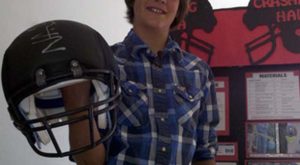 Ryan Beck was happy with third-place at the California State Science Fair. The future of the NFL may be in Beck’s hands as the 13-year-old from San Diego has invented a revolutionary new football helmet.

The eighth-grader was inspired after watching a football game and noticed the violent collisions that happen throughout an ordinary game. “Getting a concussion is like running with just your bare skull into a wall going 20 miles per hour,” Ryan said.

Science behind the design

His unique invention took some ingenuity on Beck’s part. He used a pendulum and a pressure sensor in order to determine the materials best suited for the most protective helmet. It uses the same type of foam that people stand on when trying to relieve back pain. The foam is covered with neoprene, the same stuff used to make wetsuits. The basic shape and structure of the helmet looks the same, but it’s the additional protection offered by Beck’s invention that helps reduce any impact to the brain.

Concussions and head injuries have been a major topic of discussion as of late. NFL Hall of Famer Lem Barney stated recently that he believes football may not be around in 10 to 20 years. Bigger, faster, and stronger players have increased the number of violent collisions and, thus, the number of head injuries.

Beck’s invention could be used at every level from peewees all the way up to the NFL. He even stated that younger, non-professional players need to be protected too. A Canadian study done last year found that teens who suffer concussions are more sensitive to the injury’s long-term effects than adults or younger children.

As a result of his invention of the new football helmet, Beck was invited to compete in a national science fair for teenagers. He is also researching a patent for his invention. If it can be developed, the new helmet could help to curtail the concussion problem in contact sports like football and hockey.