For 2014 World Cup Mexico Next To Qualify 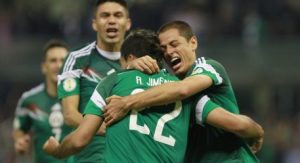 2014 World Cup mexico next qualify – Mexico played its way into the 2014 World Cup with a 4-2 victory over New Zealand thanks, in large part, to a first-half hat trick by Oribe Peralta.

Peralta scored goals in the 14th, 29th, and 33rd minutes to give Mexico an insurmountable 3-0 lead early in the first half. The New Zealanders fought back hard, though, and scored twice in three minutes to pull within a goal.

In the 80th minute, Christian James converted a penalty kick and Rory Fallon answered with another goal at the 83rd minute mark. Any hopes of a brilliant comeback were erased when Mexico’s Carlos Pena Rodriguez scored the fourth and final goal for Mexico in the 87th minute.

New Zealand had entered the match 5-1 down and their defense, or lack thereof, versus Mexico proved to be their nemesis in an attempt to get to Brazil for next summer’s World Cup.

The win was a relief for Mexico, which concludes one of its most trying campaigns in history. They went through three coaches during a 10-game stretch in the CONCACAF confederation. In that stretch, they won just twice and netted only seven total goals. Mexico finished fourth which forced them to have to play the Oceania champions, New Zealand, for the right to earn a berth in the World Cup.

2014 World Cup mexico next qualify and won. The Mexico win comes on the heels of Portugal’s win over Sweden last Friday. The win propelled Portugal to the World Cup as well. Cristiano Ronaldo, arguably the world’s best player, scored a hat trick to lead his country to Brazil next summer.

Along with securing the World Cup berth, Ronaldo reached another milestone. His third and final goal against Sweden was his 47th for Portugal. That places him right alongside Pauleta (Pedro Miguel Carreiro Resendes) as the country’s all-time leading scorer.

The 20th FIFA World Cup will begin in Brazil next summer. Play gets underway on June 12 and will conclude with a new World Cup champion on July 13.