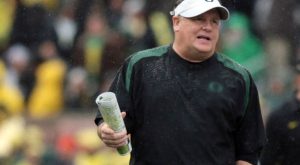 fter apparently spurning the NFL and heading back to Oregon, Chip Kelly will become the next head coach of the Philadelphia Eagles. After 14-year veteran head coach Andy Reid was fired on Dec. 31, speculation in the coaching circles was that Kelly, Oregon’s head man for the past four seasons, would be a leading candidate. Sure enough, Eagles’ owner Jeffrey Lurie brought Kelly in for an interview as soon as the Ducks’ mentor was available after Oregon’s Fiesta Bowl win over Kansas State.

Chip Kelly heading to the NFL

Kelly becomes the sixth active NFL coach to make the jump directly from the college level to a head coaching job in the pro ranks. The New Hampshire native, who went 46-7 while at Oregon, has the highest college winning percentage of all six.

One of the big questions surrounding Kelly and the rumors of a move to the NFL is how will his style of offensive play work in the NFL? Kelly has no professional coaching experience and as recent as seven years ago was coaching at the FCS (formerly Division I-AA) level. Kelly’s up-tempo, no huddle spread offense has been the rave in college football, but many question it at the pro level.

Will Chip Kelly’s Fast Pace Offense work in the NFL?

One of the benefits of Kelly’s offense regards the situation with Eagles’ QB Michael Vick, who is set to make $16 million next season but will be 33 years old. Vick, well-known for his ability to use his legs, would be a perfect fit for the zone read, the base play in Kelly’s offense. Nick Foles, who replaced Vick during the season when injured, is the prototypical drop-back passer that pro offenses covet. Will Kelly be able to fill the roster with two to three quarterbacks that fit the mold of a Dennis Dixon or, more recently, Marcus Mariota.

Lurie, as well as many others, believe that Kelly is a brilliant football mind and a great motivator of his players and that was enough to get him the job in Philadelphia. Kelly had also interviewed in Buffalo and Cleveland. Kelly was never leaning toward a jump to the NFL or staying at Oregon. He admitted that he looked at the interviews as “fact-finding” missions to give him a better perspective on making a decision. The Eagles organization is excited after interviewing 11 candidates for the job.

Kelly had interviewed last year for the Tampa Bay job taken by Greg Schiano, another college coach who jumped to the NFL. The former Oregon coach had interviewed with the Eagles just days after the Fiesta Bowl and then stated he was staying put. He re-emerged as a candidate in the past few days and a deal was worked out to make him the 21st coach in team history.

The Eagles have won just 12 games in the past two seasons including dropping 11 of its last 12 games this season after a 3-1 start. Philadelphia will have the fourth overall pick in this year’s draft which may allow the team to fill the roster with players accustomed to the up-tempo style of offense that Kelly likes. Regardless of who makes the roster, Kelly will bring a fresh new energy to the organization.